Vietnam and Russia affirmed the role of each country in the other’s diplomacy and in the global forums.

“Naturally, our friendship and our solidarity are based on deep historical roots,” Lavrov said at the meeting with Prime Minister Pham Minh Chinh, Russia News Agency reported.

The Russian FM expressed his hope that the two countries will continue making efforts for effective results of the Comprehensive Strategic Partnership which entered its 10th year in 2022.

Lavrov’s two-day visit to Hanoi comes at the invitation of FM Bui Thanh Son as the two nations mark the 10th anniversary of their Comprehensive Strategic Partnership.

In the meeting with Lavrov, Son affirmed Vietnam’s gratitude toward Russian assistance to Vietnam in wartime and its development, stating that Russia remains one of the key partners in Vietnam’s foreign affairs policy.

They exchanged views on regional and international issues of mutual concern, including Ukraine arm conflicts.

Relations between Vietnam and Russia have been strengthened over recent years. Bilateral trade hit US$7.1 billion in 2021 following a 25% jump from 2020. Russia has 151 projects in Vietnam with a total investment of more than $950 million.

The two sides agreed to remove hurdles in trade, investment, and transportation to take advantage of the Free Trade Agreement between Vietnam and the Eurasian Economic Union (EAEU – Russia, Belarus, Kazakhstan, Armenia, and Kyrgyzstan).

The two countries issued a joint statement on the vision of the Comprehensive Strategic Partnership until 2030 during Vietnamese President Nguyen Xuan Phuc’s visit to Russia between November 29 and December 2, 2021. 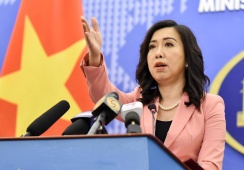 Vietnam responds to possibility of joint military drills with Russia 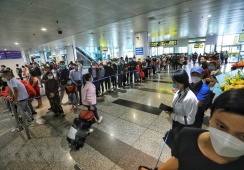