The AFF Cup finals are the last matches that coach Park Hang-Seo takes control of the Vietnamese national football team.

Vietnam lost to Thailand by a one-goal margin in the AFF Cup 2022 final second leg on January 16, the match that saw Park Hang-Seo end his reign as the head coach of the Vietnamese national football team.

Thailand won the final of the AFF Cup 2022 by 3-2 on aggregate. This is the seventh AFF championship for Thailand and they are the most-time winner of the tournament.

In the final first leg, Thailand and Vietnam shared a 2-2 draw at the My Dinh National Stadium in Hanoi with the latter playing as the home team.

The score had given Thailand some advantages over Vietnam when the two teams met again at Thammasat Stadium in Thailand’s Pathum Thani City.

Vietnam had to either win the second leg or end it with a 3-3 draw to crown the champion.

But like the first leg, Thailand left no space for the Vietnamese to play with the ball. They were ready and willing to make pressure on Vietnamese players while maintaining a good link-up to break down any attacking moves by the opponents.

In such gameplay, the Thai captain Theerathon Bunmathan continued to show his class as he controlled the game for Thailand with passing skills and good vision.

As the two teams struggled to find the net, Theerathon received the ball in the middle area and scored a 25-meter rocket into Vietnam’s net, making the only goal of the match.

After allowing the goal, Vietnam tried to push higher and replaced defensive players with attackers in hope that some miracles will happen.

But Thailand, led by Theerathon Bunmathan, were experienced enough to drive the match as they had planned. Vietnam hardly had any chances to threaten Thailand’s goal.

In the minute of 90+5, Thai player Peeradon Chamratsamee received the second yellow card and he had himself an early bath.

Thailand ended the match as the winner and was crowned the seventh AFF Cup championship in history.

The AFF Cup 2022 final second leg was also the last match for Park Hang-Seo as the head coach of the Vietnamese national football team.

Under coach Park’s reign, Vietnam football teams have won the AFF Cup in 2018, two gold medals at the SEA Games 2019 and 2021, second place at the Asian U23 Championship in 2018, and fourth place at the ASIAD 2018. Notably, Vietnam qualified for the quarter-finals of the Asian Cup 2019 and the third qualification round of the World Cup 2022.

Speaking at the conference after the AFF Cup 2022 final second leg, coach Park Hang-Seo apologized to Vietnamese fans. “I wanted to win the championship as a farewell gift to the Vietnamese, but I couldn’t. I apologized for that.”

Coach Park blamed himself for the loss and convinced the Vietnamese fans not to criticize the players as they had done their best to overturn the final score.

Recalling his five-year journey with Vietnamese football, coach Park said that he was happy to receive such huge support from the fans and the players. “It is painful for me that I won’t be with Vietnamese players in the future, especially after all the ups and downs we’ve been through together.”

But Vietnamese people never forget him. In the final first leg, the supporters filled the 40,000-seat My Dinh National Stadium with banners and messages honoring the team's achievements during Park's term in Vietnam. The fans brought to the match his statues, pictures, and banners cherishing his contributions to Vietnam's football over the past five years, which they consider a new chapter of the national football history. 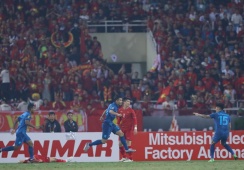