Vietnam must control and forecast air quality by 2025: PM directive

With air quality in major cities in Vietnam worsening over the years, now is the time to actively implement the plan and take bolder actions.

Vietnam’s Ministry of Natural Resources and Environment (MONRE) must improve its capacity to control, warn and forecast air quality across the country by 2025, Prime Minister Nguyen Xuan Phuc has said in a directive.

The MONRE will focus on reviewing and completing the system of national regulations and standards on environment applicable to industrial emissions and emissions from road motor vehicles in Vietnam.

The ministry has to take lead in formulating, issuing criteria and certifying eco-labels for environmentally-friendly transportation vehicles and services.

The MONRE has been instructed to create national standards for vehicle emissions and suggest how they might be applied, as well as a certification system to determine whether a vehicle is environmentally-friendly.

Citizens of Hanoi, HCMC and other big cities in Vietnam had been suffocated by heavily polluted air in the streets.

Excessive ozone in the air can have a marked effect on human health, causing breathing problems, triggering asthma, reducing lung function and leading to lung diseases.

With air quality in major cities in Vietnam worsening over the years, now is the time to actively implement the plan and take bolder actions, the government directive stated.
The government should strengthen its air quality monitoring system and share the data with the public, while monitoring stations should be installed and put into operation, said the directive.

In order to protect people’s health, the government needs to enforce emergency measures to minimize the emissions during the period of air pollution level far exceeding the WHO guidelines, according to the directive.

It also asked to thoroughly identify sources of air pollution and a long-term plan to ensure clean air. Most sources of outdoor air pollution are well beyond the control of individuals and demand concerted action by local, national and international policymakers.

The MONRE is responsible for improving regulations and laws on environmental protection. The ministry should also promulgate technological norms about exhaust fumes and air quality which are in accordance with developed countries. 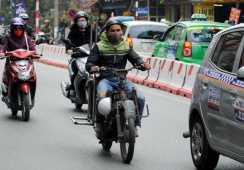