Vietnam came second in terms of funding attraction in ASEAN this year, accounting for 36% of the total, significantly up from just 0.4% in 2018, according to a report on Fintech in ASEAN conducted by United Overseas Bank (UOB), PwC and the Singapore Fintech Association (SFA).

Singapore remains the top destination by attracting the lion’s share of global funding among ASEAN countries, 51% of funding for the region, but down from 53% in 2018, Indonesia, receiving 12%, holds the third place, compared to 37% last year.

In 2019, Vietnam saw a sharp increase in funding, attributable to two large deals namely US$300 million into VNPay, the largest deal for a fintech firm in ASEAN in 2019, and US$100 million into Momo Pay’s Series-C fundraising round at third place.

“The interest in investing into fintech firms in Vietnam and Indonesia is also driven by the business potential in both markets given their large and underbanked populations as well as the high mobile and internet penetration rates,” stated the report.

In the last five years, ASEAN has seen a strong compound annual growth rate (CAGR) of 101% in fintech funding. In 2014, funding into fintech firms was US$35 million, rising sharply to US$1.14 billion at the end of the third quarter this year.

According to the report, in addition to the encouraging growth in funding, funding levels for fintech firms at different stages of their growth are also very promising. Last year, funding for later stage fintech firms increased 211% to US$370 million. In the first nine months of this year, a total of nine fintech firms across ASEAN have raised later stage Series-C or beyond funding. The firms are 2C2P, Advance.AI, Akulaku, BluePay, CXA Group, Momo Pay, Nium3 , OVO and Singapore Life.

“The strong later stage funding also indicates the confidence that investors have in the growth potential of ASEAN-focused fintech firms,” the report suggested.

Singapore continues to be the preferred base of fintech firms in ASEAN, which is home to 1,157 or 45% of all fintech in ASEAN , while Vietnam, with 136, is the lowest among ASEAN-6 countries (Singapore, Indonesia, Malaysia, Thailand, the Philippines, Vietnam).

Vietnamese fintech firms offering payment solutions received the most funding, in line with the government’s move towards the use of mobile payments. According to the State Bank of Vietnam (SBV), the country’s central bank, as of March 31, 2019, the number of financial transactions conducted on mobile phones almost doubled compared to 2018. The Vietnam mobile payments market is projected to reach US$70.9 billion by 2025, up from US$16 billion in 2016.

The report assessed the SBV is taking a cautious approach on fintech regulations. For example, the SBV imposed a limit on the number of payment licenses that can be granted to non-bank organizations in order to safeguard consumer interest, at the same time proving to be very selective in issuing payment licenses, granting only 31 so far.

The fintech firms that have received the license are permitted to provide services such as electronic payments, money transfers and e-wallets. The SBV is also piloting peer-to-peer (P2P) lending, which is set to build a foundation for a robust P2P lending industry in the country.

To spur more fintech developments in the coming year, the SBV has also continued with the second iteration of the FinTech Challenge Vietnam (FCV). The competition focuses on fintech solutions that use big data and artificial intelligence technology to foster financial inclusion and to improve cybersecurity. 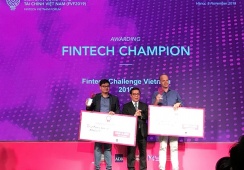