Hue stressed the priority of raising the efficiency of legislative works, supreme supervision, and decision making.

Hue then proceeded with taking the oath of office by pledging full allegiance to the Motherland, People, and Constitution of Vietnam, while vowing to fulfill the duties entrusted by the Party, State, and People.

In his inaugural speech, Hue said he would spare no efforts in “improving the quality and effectiveness of the National Assembly activities in the best interest of the nation and the happiness of the people, promoting democracy, unity the rule of law, integrity, and transparency. He pledged to raise the efficiency of legislative works, supreme supervision, and decision-making.

Hue, meanwhile, stressed the importance of pushing forward with supervision activities, which is a major step in enhancing NA’s efficiency in operation.

“There would be new changes in the hearing process at the NA,” Hue said while referring to the plan of holding a vote of confidence for senior officials of the Government.

According to Hue, the NA would continue to embrace digital transformation in its activities and carry out meetings with voters to strengthen the bond between the people and their representatives.

At the first session, the deputies also voted re-elected Tran Thanh Man, Nguyen Khac Dinh, and Nguyen Duc Hai as deputy chairmen of the National Assembly, and voted to elect Senior Lieutenant General Tran Quang Phuong, vice chairman of the General Political Department of the Vietnam People’s Army, as another deputy chairman of the legislative body.

The first session of the 15th NA, scheduled to take place from July 20-31, would vote for 50 key positions at the Government, the Legislature, Supreme People’s Court, Supreme People’s Procuracy, and the State Audit Office of Vietnam. 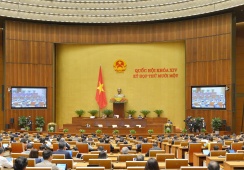 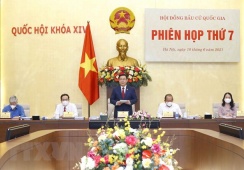 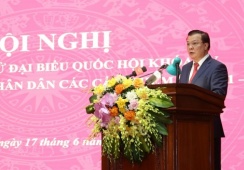