The summit aims to strengthen exchanges and mutual learning from governance experiences between the CPC and political parties worldwide.

General Secretary of the Communist Party of Vietnam (CPV) Nguyen Phu Trong on July 6 attended the CPC and World Political Party Summit in response to the invitation of the CPC Central Committee.

The summit themed “For the People’s Wellbeing: The Responsibility of Political Parties”, is held via video link and gathers more than 500 leaders of political parties and political organizations from 160-plus countries and over 10,000 party representatives.

The CPC and World Political Parties Summit is a multilateral diplomatic event that is held at a time when the CPC marks its 100th founding anniversary, serving as a platform to strengthen exchanges and learning of experience in governance between the CPC and political parties around the world.

They will also join hands in responding to challenges brought by unprecedented changes in a century and the Covid-19 pandemic as well as seek solutions to ensure happiness for the people and promote peace, development, and prosperity in the world.

Making a speech at the summit, Trong said that the Vietnamese delegation attended the summit with an open and cooperative spirit, based on the external policy of independence, peace, friendship, cooperation and development, multilateralization and diversification of ties, and the tradition of pure internationalism and respect for the Vietnam-China relations.

The Vietnamese Party leader said political parties should accompany their governments to bring happiness to the people, actively engage in efforts to respond to global challenges; uphold the spirit of solidarity and sense of responsibility; foster dialogue, respect each other’s legitimate interest, and comply to international law, especially in addressing differences.

“The most urgent issue of countries and political parties at present is to promote international cooperation to repel the COVID-19 pandemic, quickly restore socio-economic development and ensure social security,” Vietnam News Agency quoted him as saying at the event.

The Party chief said Vietnam’s practical experience is to consider the people’s happiness as the target and rely on their invincible strength.

He thanked the people of other countries, political parties, socio-political organizations, including China, for their support and assistance to Vietnam throughout periods.

General Secretary of the CPC Central Committee and Chinese President Xi Jinping called for upholding and promoting the common values of humanity, which are peace, development, equity, justice, democracy, and freedom.

He urged political parties in the world to shoulder their responsibility for the pursuit of people's wellbeing and the progress of mankind. He also called for international cooperation to fight the pandemic.

Leaders of political parties, heads of state, and heads of government expressed their hope that China will grow stronger and contribute positively to peace, development, and prosperity in the world.

The political parties held that the world's people have a common wish for peace and freedom, and the political parties are responsible for addressing issues of public concern, and cooperating in the fight against the Covid-19 pandemic, and recovering socio-economic development.

The political parties also discussed their own concerns such as fighting against embargo, terrorism, and war. 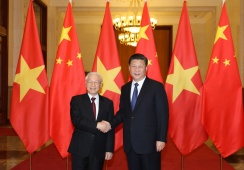