Po Hen Border Post is among a series of places across the northern border shared with China that suffered the bloody invasion in 1979.

Vietnam’s Prime Minister Pham Minh Chinh has commemorated Vietnamese soldiers who lost their lives in a battle for national border protection more than four decades ago.

On January 26, Chinh led a delegation to lay a wreath at Monument to Heroic Po Hen Martyrs in Mong Cai City of Vietnam’s Northern Province of Quang Ninh that borders China.

His worship is aimed to eternalize the martyrs who sacrificed their lives for the country’s sovereignty at the battle in Hai Son Commune, Mong Cai City on February 17, 1979.

The PM-led delegation and local people reviewed the heroic and indomitable tradition of officers and soldiers of Po Hen Border Post in the cause of national protection in the bloody battle.

They vow to inherit the tradition to maintain sovereignty protection and border security for peace, friendship, stability, and mutual development in the boundary areas.

At the meeting with local authorities, PM Chinh reminded them of difficulties ahead so as for them to take into account when embarking on a flexible adaptation to the situation, with a focus on territorial integrity and self-reliance diplomacy for trustworthy friendship and partnership.

Concluding the meeting, Chinh asked the local authorities to closely follow the party and state’s leadership on diplomacy and flexibly take their own long-term strategies at the same time.

Indeed, Quang Ninh was just one of six Vietnamese border provinces where soldiers fell to defend the Fatherland 43 years ago.

The Po Hen Monument is aimed to eternalize Vietnamese people’s defending spirit and warn them of lurking foreign invaders. 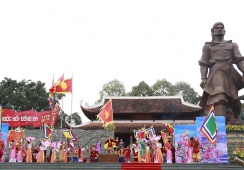 The battlefield of Ngoc Hoi - Dong Da, a triumph of cunning and courage