Vietnam records fiscal surplus of US$2.04 billion in January

Vietnam recorded a state budget surplus of VND47.5 trillion (US$2.04 billion) in January, according to the Ministry of Finance (MoF).

According to the MoF, the country’s state budget expenditure in January stood at VND98.6 trillion (US$4.24 billion), equivalent to 5.6% of the estimate, meeting demands for regular spending and capital expenditure.

Total disbursement of public investment was estimated at over VND4.44 trillion (US$191.06 million), completing 0.95% of the government’s plan and higher than the disbursement rate of 0.5% mandated by the National Assembly and 0.69% of the Prime Minister’s target.

During this very first month of the year, most ministries, branches and localities are allocating capital plans and estimating costs for projects, so the disbursement rate is low, said the MoF.

With the amended Public Investment Law in effect from the beginning of 2020 and the goal of raising total investment capital by 13.2% in 2020, higher than an 11% increase in 2019, Bao Viet Securities Company expected that the disbursement of public investment funds will slightly improve in 2020. 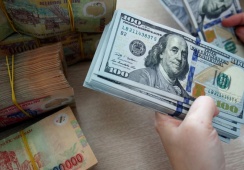