Vietnam is set to face a surge in power demand and consumption over the coming decade, which is likely to outpace capacity growth in the near term, stated Fitch Solutions.

Vietnam’s renewables capacity growth is forecast to expand robustly, which is in line with a rapidly-expanding project pipeline and continued progress in ongoing projects, according to Fitch Solutions, a subsidiary of Fitch Group.

Driven largely by solar and wind expansion, Fitch Solutions expects the market to add more than 17GW of non-hydro renewables capacity between end-2020 and 2029, reaching over 25GW by 2029. This marks a notable increase from its previous forecast of 18GW by 2029, with most of the upward revisions within the wind sector.

Such a robust forecast is underpinned by a strong supportive regulatory environment and rising investor interests, which has notably strengthened the project pipeline.

According to Fitch Solutions, the government remains highly committed to boosting the country’s renewables growth, particularly as it is seen as a potential strategy to deal with looming power shortages.

Vietnam is set to face a surge in power demand and consumption over the coming decade, which is likely to outpace capacity growth in the near term. This stems from an expanding industry and manufacturing sector, particularly as the government attempts to better position Vietnam as a strong alternative manufacturing hub from China, Fitch Solutions noted.

In an attempt to encourage foreign investments and growth in the sector, the government offers some preferential policies, attractive feed-in-tariffs (FiT) and other financial incentives such as preferential tax and duty levies.

The government is also look to transition toward competitive auctions from 2021/2022, which will be crucial for more sustainable longer term growth. The Electricity Regulatory Authority of Vietnam (ERAV) has also launched the Direct Power Purchase Agreement (DPPA) pilot program, where renewable energy producers can sell and deliver electricity directly to corporate customers.

The size of the DPPA program will range 400-1,000MW, and be implemented nationwide from 2020-2022. It is available for wind and solar producers with a capacity greater than 30MW and consumers in industrial manufacturing purchasing electricity at a voltage level of 22kV or larger.

While the program still remains relatively limited in scope, it is expected to serve as a ground to improve the market’s legal framework and offers favorable returns to renewable producer, particularly as an increasing number of international corporations are also looking to reduce their emission profile.

Notably, the government is expected to announce a new National Power Development Plan 2021-2030 (PDP VIII) by March 2021, and Fitch Solutions predicted that renewable energy will likely see a greater focus. Based on the country’s latest power development plan, the government targets to install 2GW of wind capacity and 4GW of solar capacity by 2025, and 6GW and 12GW respectively by 2030, but these targets are expected to see substantial increases. The latest draft accounts for 6GW by 2025 and 10GW by 2030 for wind, and 12.5GW by 2025 and 20GW by 2030 for solar. Preliminary media reports from the region also highlighted a possible 12GW wind target by 2025 as well.

Therefore, Fitch Solutions believed the finalized plan will include more specific details on mechanisms to support growth of the sector and boost investor interests.

Despite strong capacity growth, the share of non-hydro renewables in the overall power mix will remain limited, due to an underdeveloped grid capacity and an ongoing preference for baseload thermal sources.

With the influx of new renewable projects coming online, Fitch Solutions noted that transmission infrastructure development has not kept pace, which presents risk of bottlenecks to growth. This is pertinent as a majority of renewables growth is located within the southern regions of Vietnam, it added.

In particular, the rapid build out of renewable projects in Ninh Thuan and Binh Thuan has caused grid overload resulting in renewables curtailment, while similar risks may occur going forward.

Furthermore, the intermittency of non-hydro renewables will also pose challenges to its integration into the grid, and requires more adequate grid management and flexibility capabilities. State-owned utility Electricity Vietnam (EVN) has flagged increasing risk of a grid overload in a recent report, and is actively looking to increase investments and capex into transmission lines.

Fitch Solutions expected that the government will look to facilitate more private participation to facilitate the expansion of its transmissions network. In October 2020, Trung Nam Group completed a 17km 500kV and 220kV transmission line, alongside a 500kV substation, to connect its 450 MW Trung Nam Thuan Nam Solar Plant to the national grid. This is the first time a private company was given a license to build transmission infrastructure as this is traditionally controlled exclusively by EVN. 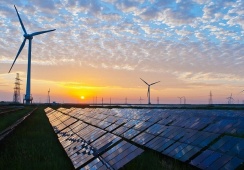 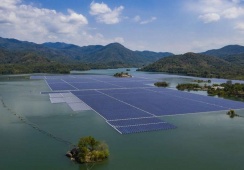