The aid includes 1,000 medical protective clothes and 100,000 antibacterial face masks, which have been delivered to South Sudan by the Royal Australian Air Force.

On behalf of the Vietnamese government, the Permanent Representative of Vietnam to the UN Ambassador Dang Dinh Quy announced the support of medical equipment to aid South Sudan in the fight against the Covid-19 pandemic.

These include 1,000 medical protective clothes and 100,000 antibacterial facemasks, which have been delivered to South Sudan by the Royal Australian Air Force.

“The Vietnamese government wants to share the difficulties in fighting the pandemic with South Sudan,” said Quy at a ceremony on May 19.

Representative of South Sudan to the UN expressed his thanks for the much-needed support from Vietnam, saying the pandemic situation in the country remains serious despite having vaccines.

As of May 19, South Sudan recorded 10,652 Covid-19 cases and 115 fatalities. At the UN Mission in South Sudan (UNMISS) the infection cases alone were 225 with three deaths.

In 2014, Vietnam participated in the UNMISS as its first official peacekeeping mission by sending officers from the Vietnam People’s Army.  Four years later, the country deployed a level-2 field hospital with 63 medical and technical staff.

In response to the call of UN Secretary General Antonio Guterres in March 2021 on efforts to vaccinate UN peacekeeping forces against the Covid-19 pandemic, Vietnamese medical staff had been administered with Covid-19 vaccines before joining the UNMISS, as well as bringing vaccines for those already deployed there.

Such efforts showed the responsibility of the Vietnamese government in sharing difficulties with the UN and protecting the health of Vietnamese soldiers currently in the peacekeeping missions. 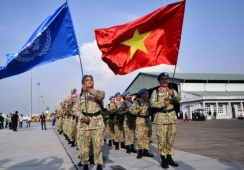 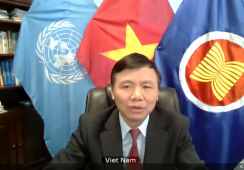