Vietnam tax revenue down 2.4% in Jan-May

The impacts of the Covid-19 pandemic led to a decline of 2.4% year-on-year in Vietnam’s tax revenue collection in the first five months of this year to VND499.83 trillion (US$21.73 billion), according to the General Department of Taxation.

The department attributed the 15-day nationwide social distancing campaign from April 1 to 15, in which non-essential services and businesses were forced to close or scale down operation, to the fall in tax revenue.

Meanwhile, government’s supporting programs, including the extension of payment deadline for land rental fees and taxes for enterprises, organizations and individuals affected by the pandemic, also contributed to the decline.

Among measures to mitigate negative impacts on the state budget, the taxman aims to tighten the value-added tax refund process and recover at least 80% of tax arrears incurred before December 31, 2019, along with the reduction of tax debts in 2020 to below 5% of the total.

In the first five months of 2020, Vietnam had 48,341 newly established enterprises, down nearly 5,500 enterprises compared to the same period last year.

According to the General Department of Taxation, as of June 1, the agency has received 128,684 claims to defer taxes and land rental fees payment with an amount of VND36.96 trillion (US$1.6 billion).

The process of applying for extension of tax payment has now been integrated into the national portal of public online services, aiming to create convenience for the business community and individuals.

The Ministry of Finance estimated fiscal deficit could increase to 5 – 5.1% of GDP, significantly higher than the target of 3.4% (excluding debt principal repayments) set in December 2019. 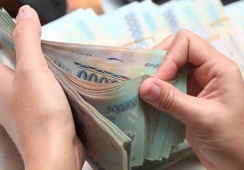 How can tax agencies tackle the impact of Covid-19?