Vietnam will start rolling out vaccine passports from April 15 to facilitate domestic and international travel, the Ministry of Health (MoH) announced at a meeting on April 4.

Deputy Minister of Health Tran Van Thuan said at the conference that Vietnam had administered over 200 million Covid-19 vaccine shots as of April 1, with virtually all adults having received the first dose, 99% the second, and 50% the third. A total 99% of children aged 12-17 have been injected the first vaccine shots, and 94% got the second.

“At present, Vietnam’s vaccination coverage is high compared with the region and the world. The vaccine passports are expected to come in handy after Vietnam has fully reopened its borders since March 15, facilitating both inbound and outbound tourism,” Thuan said.

The MoH has piloted the issuance of e-vaccine passports in Hanoi’s three major hospitals, namely Hospital K, Bach Mai, and Hospital E. These health institutions were chosen because they are the major hospitals in the capital city where Covid-19 vaccination data has been well organized and stored. In Ho Chi Minh City, vaccine passports have already been trialed for those vaccinated at Gia An 115 General Hospital, Thuan added.

“Covid-19 is promoting information technology application. Innovative approaches in this period will accelerate the use of digitalized systems and their quick adoption in the context that the world is approaching the new normal,” the deputy minister emphasized.

According to Do Truong Duy, director of the MoH’s Department of Information Technology, localities would confirm people’s vaccination status starting April 8, and vaccine passports would be available starting April 15.

For getting a digital vaccine passport, people must declare accurate information that is reviewed by immunization agencies based on the national database for authentication, Duy said, adding that people should double-check their vaccination info themselves to report possible errors.

“After a week of piloting, the national vaccination system has responded well to the issuance of digital vaccine passports. The vaccine passport will be used in conjunction with other personal identification documents like identification cards. Data that identify people will be stored into QR codes for security reasons,” Duy noted.

He added that Vietnam's vaccine passport will contain personal information including the types of vaccines administered and the number of doses given. The information is encoded and stored in a QR code, which expires 12 months after it is created.

Everyone who has been vaccinated and have information on the vaccination management platform will be given a QR code displayed on the PC Covid or the "So Suc Khoe Dien Tu" (Electronic Health Book) applications in their smartphone for checking when going abroad. If people don’t have the apps, they can get their passports by accessing a health ministry website, to be available this week, and filling in necessary information. 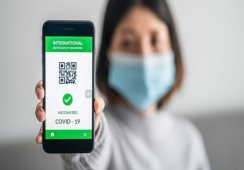