Vietnam and Russia put defense, oil and gas among pillars in the decade-long relations.

Secretary General of the Communist Party of Vietnam (CPV) and State President Nguyen Phu Trong has said Vietnam vows to strengthen the comprehensive strategic partnership with Russia, one of the country’s traditional partners.

Trong made the statement in a phone talk with Dmitry Medvedev, chairman of the United Russia party and deputy chair of Russia’s Security Council, on February 8.

He highly appreciates Russian people’s warm sentiment towards Vietnam, which manifests the trust and friendship and comprehensive partnership between the two parties and nations.

Dmitry Medvedev congratulated Vietnam on the success of the CPV’s 13th National Congress and Nguyen Phu Trong on re-election as the Party General Secretary.

He affirmed that Russia attaches importance to the traditional friendship and comprehensive strategic partnership with Vietnam.

The two leaders discussed a number of solutions to boost the bilateral ties. Medvedev said Russia expects to cooperate with Vietnam in the fight against the Covid-19 pandemic and other fields.

In the meeting with Vietnam’s Prime Minister Nguyen Xuan Phuc in Hanoi in November 2020, Russian Ambassador to Vietnam Konstantin Vnukov said Russia is willing to support Vietnam in the Covid-19 battle, including the provision of vaccines.

The relationship between Vietnam and Russia (and the former USSR) is long-lasting and inspired generations of Vietnamese people.

Vietnamese veteran officials who used to study in the USSR decades ago have said that Vietnam needs to have long-term strategies to sustain the durable relationship with Russia that has lasted for more than seven decades.

They said priceless support in the past is the treasury for the further Vietnam-Russia relationship in which defense is one of pillars, highlighting the Russian great support in the victory and progress of the Vietnam People’s Army, mostly in the wars.

Dmitry Medvedev made his latest visit to Vietnam in May 2019, during which, the two sides’ leaders stressed the focus on oil and gas, nuclear, defense and security.

In different meetings between the two sides, they reaffirmed the defense and oil and gas are pillars.

Regarding energy relations, the two countries said they will support both Vietnamese and Russian firms in the exploration and operations of oil and gas in Vietnam’s continental shelf and in Russia’s territory.

Companies at the center of attention include Zarubezhneft, Gazprom, Novatek, Rosneft, among others.

In terms of defense, part of the deepened ties has been evident over the past year with Vietnam’s new orders of Russian technologies, as Moscow traditionally is Vietnam’s biggest partner in this respect, or visits and exchanges that have reinforced the relationship of both sides.

One of the aspects of Russia-Vietnam defense collaboration that has received attention in recent years is the potential for the setting up of new maintenance, repair, and overhaul (MRO) facilities in Vietnam. 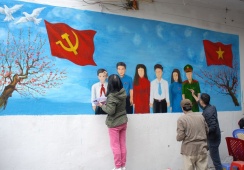 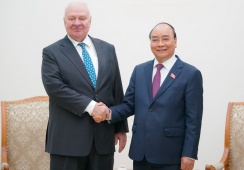