Intellectual property, labor rights, and environmental protection are issues that Vietnam should focus on to meet requirements from the EU-Vietnam Trade Agreement.

The Vietnamese Government should speed up the progress in realizing the country’s commitments in free trade agreements to better integrate into international markets and enhance its role in the global value chains.

EuroCham Vice-Chairman Jean-Jacques Bouflet stressed the view at the launch of the Vietnam Institute for Economic and Policy Research (VEPR)’s report assessing the impacts of the EVFTA on the Vietnamese economy on November 3.

According to Bouflet, the EVFTA has opened up a new chapter in Vietnam-EU trade relations by ultimately eliminating duties on 99% of all goods traded between the two sides, which is especially significant due to the mutually complementary nature of the Vietnamese and EU markets.

Bouflet referred to a recent study conducted by the EuroCham that showed 65% of its members expected the EVFTA to be beneficial for their operation.

Meanwhile, 27 EU members have so far invested over $22 billion in 160 projects in Vietnam, accounting for 5.5% of the country’s total FDI commitments.

Bouflet, however, noted recent tax policies in certain economic fields, including in the pharmacy and auto industries, are setting up new trade barriers and undermining Vietnam’s status as an attractive investment destination.

“Up to 35% EuroCham members see administrative procedures as the main hurdle in implementing the EVFTA, while 18% consider trade barriers,” he added.

The EuroCham representative noted Vietnam should consider competition as a positive aspect in any FTAs, as this would be the main driver for companies to innovate, pursue higher standards and efficiency.

As such factors would provide local firms with a better chance to penetrate European markets and maximize the EVFTA impacts, they would have greater resilience to address difficulties in a new normal.

Sharing this view, VEPR researcher Pham Van Long said non-tariff measures and complicated administrative procedures have been causing undue obstacles for foreign investors entering the Vietnamese market as well as for Vietnam imports from abroad, reducing Vietnam's competitiveness compared to other countries in the region.

Long added Vietnam's legal system has been gradually improving to meet the requirements under EVFTA. However, the country is following the strategy of “avoiding difficult tasks and doing easy tasks first”.

“The speed of legal reforms in Vietnam, therefore, would become slower than expected in the EVFTA, especially in intellectual property, labor rights, and environmental protection,” Long said.

While Vietnam is taking the lead among ASEAN countries in terms of trade relations with the EU, Long said the EU is negotiating bilateral trade agreements with other countries such as Thailand, Malaysia, the Philippines, or Indonesia.

“These are all countries that compete directly with Vietnam in exporting goods to the EU,” Long said, urging the country to make the most of the existing advantages and opportunities from being among the first ASEAN signatories of FTA  with the EU to maintain and enhance trade relations with the bloc.

Le Quoc Phuong, former Deputy Director of the Center for Industry and Trade Information under the Ministry of Industry and Trade, said a key solution would be to enhance the local businesses' competitiveness as current Vietnam’s current utilization rate of the EVFTA remains at only 30%.

“Foreign-invested sector continues to be a key player in Vietnam’s trading landscape by making up to 74% of total exports and 60% of total industrial production value,” Phuong said.

In this regard, Bouflet from EuroCham called for Vietnamese companies to speed up their adaptation process to international standards and trade practice, adding a domestic market is an ideal place for them to develop their skills before going global.

Looking at a bigger picture, Bouflet said Vietnam is on the right track in its pursuance of globalization and restoring trust from foreign partners, even if the pandemic has severely impacted Vietnam’s economic potential.

“In mid-and long-term, Vietnam remains one of the preferred destinations for European companies,” he concluded. 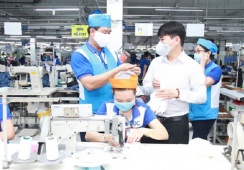 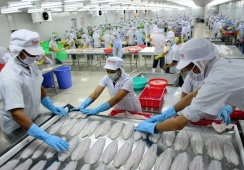 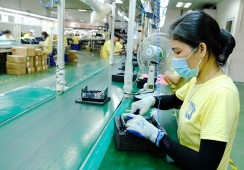