The Vietnamese President said Vietnam is a responsible UN member and will run for membership of the UN Human Rights Council for 2023-25.

Vietnamese President Nguyen Xuan Phuc expressed his hope that the Vietnam-UN relations would be much strengthened in the second term (2022-2026) of UN Secretary-General António Guterres.

Phuc said in the telephone conversation with António Guterres shortly after the UN’s leader was reelected for the post on June 19. The Vietnamese Presidend is among the first international leaders congratulating him.

The president affirmed that Vietnam, being a responsible member of the UN, has been actively contributing to the common work of the largest international organization. These include taking the role of a non-permanent member of the UN Security Council, participating in UN peacekeeping operations, implementing the Sustainable Development Goals (SDGs), and running for membership of the UN Human Rights Council for the 2023-2025 term.

Phuc expressed his support for the priorities and orientations of the UN Secretary-General in the next five-year term.

For his part, António Guterres acknowledged Vietnam’s active and responsible contributions to the UN and global affairs, especially at the UN Security Council, and the implementation of the SDGs responding to climate change and the Covid-19 pandemic. He said Vietnam is an important factor contributing to peace and stability in the region.

The Secretary-General highly appreciated Vietnam’s efforts in treating a UN staff infected with Covid-19, saying that Vietnam’s actions have demonstrated the spirit of international solidarity to overcome the pandemic.

On June 18, António Guterres, a Portuguese politician, was sworn in for the second term in the UN. He called for new era of ‘solidarity and equality’, saying that he was aware of the immense responsibilities bestowed on him at this critical moment in history.

Guterres was the sole candidate from the UN’s 193 Member States to vie for its top job. His first five-year term began in January 2017.

He was nominated by his homeland, Portugal, and appointed by acclamation by the General Assembly, following prior endorsement by the UN Security Council, for a second term that runs from January 2022 to December 2026.

“Serving the UN is an immense privilege and a most noble duty,” he tweeted. 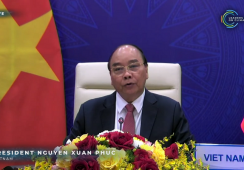 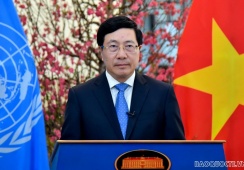