The Mekong Delta, the southern part of Vietnam, has been active in coping with natural disasters thanks to the government’s comprehensive measures over the past three years.

The region of more than 40,500 square kilometers and nearly 20 million inhabitants has transformed from a region of harsh conditions to an area taking advantage of serious salt intrusion for sustainable development, top cabinet leaders said at a conference on March 13.

The region has drawn nearly US$2.5 billion of investment from foreign countries and agencies while it marked a rise from 12% to 17% in the country’s total investment over the past five years, reported the 3nd Conference on Climate Resilience and Sustainable Development of Mekong Delta, Vietnam.

The event is aimed to review the three-year rolling out the government’s Resolutions 120/NQ-CP with the attendance of Prime Minister Nuyen Xuan Phuc, deputy PMs, ministers, leaders of 13 city and provinces in the Mekong Delta, dozens of ambassadors from the US, the UK, Japan, The Netherlands, Australia, Cambodia, Laos, Thailand and representatives of international organizations namely the World Bank, UNDP, JICA, AFD, GIZ, IUCN, WWF, KfW, IOM, IRRI, among others.

In 2017, the resolution was released with an aim to ensure the sustainable development of the region which accounts for 13% of Vietnam’s total area and 18% of the national population.

Its development pillars include renewable and energy efficiency; infrastructure and environment; agriculture and aquaculture; and food processing and related transportation logistics services.

The overall goal of the resolution is to encourage selecting  a natural and favorable adaptation models respecting law of nature, avoid harsh intervention in nature, and develop sustainably under the motto of living together with floods, salt, drought, lack of water, and being adaptive to practical conditions.

Prime Minister Nguyen Xuan Phuc, three years ago, had claimed that “We should not let challenges become threats, but turn challenges into opportunities and promote growth.”

Speaking at the conference, World Bank Country Director for Vietnam Carolyn Turk said the resolution marks a milestone from a passive approach to climate change towards “proactively adapting to nature” model. The resolution has shown that climate change, sea level rise, extreme weather and saltwater intrusion have become new normal in the Mekong Delta.

The Mekong Delta is a testament to the Vietnamese government’s transformative thinking and approach to development, becoming a role model for the regional development.

As a Development Partner, the World Bank is committed to continuing to work with the Government, through a strong partnership, for a sustainable, prosperous and resilient Mekong Delta.

“In the future, the World Bank is ready to mobilize more knowledge and financial resources to implement the goals and vision of Resolution 120,” Carolyn Turk committed. 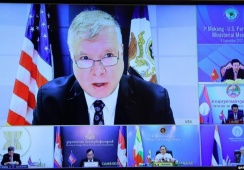