The situation may not be as serious as several months before, thanks to a high vaccination rate and a better healthcare system.

Vietnam on November 12 recorded 8,982 coronavirus infections, the highest in one month and a half, following the government’s revamped Covid-19 response strategy to recover the economy.

Statistics by the Ministry of Health showed that the number of cases start rising back from mid-October, from more than 3,000 to more than 8,000 per day currently.

On November 14, the daily cases remained more than 8,000, with the majority detected in Ho Chi Minh City and its neighboring provinces of Dong Nai, Binh Duong, and Tay Ninh.

Some localities in the Mekong Delta like An Giang, Dong Thap, Soc Trang, Can Tho, Tien Giang continue seeing three-digit daily infections, varying around 300-600 each. The central region also becomes another affected region with hotspots of Binh Thuan and Khanh Hoa, two famous tourist destinations. Meanwhile, Dak Lak and Gia Lai are the two hardest-hit places in the Central Highlands, each reporting dozens per day from a few before.

Associate Prof. Tran Dac Phu, former head of the General Department of Preventive Medicine and senior advisor to the Vietnam Public Health Emergency Operations Center (PHEOC), attributed the rise to the relaxation of restrictions in almost all areas after the government attempted to switch the anti-pandemic strategy to flexible adaptation to Covid-19.

The relaxed restrictions that open up increasing chances of social mobility have led to community infections, Assoc. Prof. Phu told The Hanoi Times in a phone interview.

Flows of people, mostly workers, from Ho Chi Minh City and the manufacturing hubs of Dong Nai, Binh Duong, and Long An have made the transmission more widespread, causing infection clusters in the Mekong Delta and Central Highlands. Hanoi, with daily cases varying around 100, is no exception, having the first cases linked to returnees from the southern affected areas, Dr. Dac Phu said.

In addition, the most affected regions themselves like Ho Chi Minh City, Binh Duong, and Dong Nai reported more infections due to the transmission of locally-infected cases.

The fact that when following the flexible adaptation approach under the government’s Resolution 128, most localities were opened to people outside without testing requirements, including those from Covid-hit regions, spreading the virus on a large scale.

He said the situation has prompted rapid response against the pandemic, the health expert said, pointing out some missions that authorities need to be tasked with, namely checking safety measures in production establishments, businesses, and service providing facilities; and strictly imposing 5K (masking – disinfection – distance – no gathering – medical declaration) principle.

However, the situation may not be as serious as several months before, thanks to a high vaccination rate and a better healthcare system. Specifically, Covid-19 patients, including those with mild symptoms, got early treatment from a wide network of medical facilities, typically mobile clinic stations.

In face of the relaxation, it’s necessary to closely follow the health sector’s warning and recommendation to avoid the worse situation, Assoc. Prof. Phu emphasized. Accordingly, different levels of precautions would be adopted based on the number of infections out of 100,000 residents, the vaccination rate, the healthcare system capacity, and the medical response capacity.

Contact tracing, quarantine, and testing remain necessary in the new anti-pandemic measures to mitigate losses as much as possible, he noted.

Hanoi on November 14 reported three-digit daily infections for one week in a row, with cases detected in 16 out of 30 districts, according to the local health sector. Since the fresh coronavirus outbreak that flared up in late April, the city confirmed around 6,000 cases. To prepare for the treatment of Covid-19 patients in case of rising infections, the city has built a scenario to treat roughly 40,000 patients. 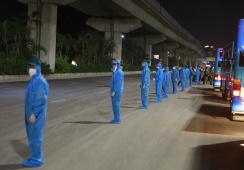