Vietnam’s credit growth as of June 9 expanded by 8.15% against late 2021 and up 17.09% year-on-year, which is in line with the ongoing economic recovery process.

“The SBV is committed to managing monetary and fiscal policies flexibly and actively to contain inflation, stabilize macro-economy and the foreign exchange market,” he said, stressing the banking sector stands ready to provide sufficient capital for economic development.

According to Quang, before the credit quota policy, commercial banks had had high levels of credit growth that far exceeded theỉ governance capabilities,  posing high risks of losing liquidity.

Quang noted credit growth demand from banks for the past years has been over 20% despite the target of around 14%.

“With such high pace and without credit room control, this would lead to high inflationary pressure and high capital mobilization rate,” he added.

“The SBV would continue to keep its policy rates unchanged despite pressure for easing monetary policy and rising interest rates in countries around the world. This would help banks to access capital from the central bank with low cost and further reduce lending rates for customers,” he said.

Since late April 2022, the SBV has instructed banks to restructure the payment deadline for total outstanding loans worth over VND695 trillion (US$30 billion) for over 1.1 million customers.

“In the coming time, the SBV would continue to use monetary and fiscal tools to aid the economic recovery  and improve the market resilience against future shocks,” he added. 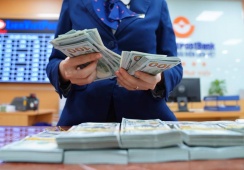