Trade turnover this year could be well over US$667 billion, representing an increase of 22.4% year-on-year, which resulted in a surplus of $3 billion.

Vietnam’s exports in 2021 are estimated at US$335.23 billion, representing a sharp rise of 18.6% year-on-year and surpassing the Government’s target of 4-5% for this year.

In December, the export turnover could reach $33.5 billion, up 5.1% month-on-month and 21.1% year-on-year, while imports also are expected to go up by 4.5% against the previous month to $32 billion, resulting in a trade surplus of $1.5 billion in December.

A report from the Ministry of Industry and Trade (MoIT) suggested these are huge achievements of Vietnamese enterprises given the severe impacts of the Covid-19 pandemic on the economy.

“The fourth outbreak, in particular, had directly hit production hubs in both the North and the South,” it added.

The strong export growth, nevertheless, proved the speedy recovery of businesses, especially in key fields of garment and footwear, in which companies have been able to complete contract orders on time.

Another key factor pointed out by the MoIT is the effective utilization of free trade agreements that Vietnam is a part of.

According to the MoIT, Vietnam’s exports to Canada and Mexico that are having a shared FTA with Vietnam in CPTPP continue to maintain double-digit export growth.

Other markets such as the EU, UK, and Peru also posted strong growth during the year.

The ministry singled out the EVFTA as a major boost for Vietnam’s exports that help the country diversify trade partners. In this regard, the country’s key export staples of footwear, garment, or farm produce are able to take advantage of preferential treatment provided in the EVFTA right after the deal kicked off. 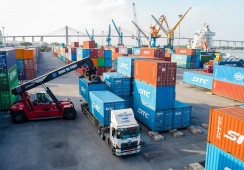 Vietnam - a major driver of global trade growth by 2030