West of Hanoi – a promising investment area for property developers

The increased supply in the area has come from infrastructure drivers.

The West of Hanoi is a promising investment area with the increasing number of good quality developments, Matthew Powell, Director of Savills Hanoi said.

The West of Hanoi is expected to continue to lead the villa and townhouse market in 2021. Future developments will change the existing nature of office and apartment supply, with priorities given to this area, according to the latest Savills Market Report for the first half of this year.

A-Grade supply remained steady over the last five years at 53% share, mainly managed by Ascott and more recently Oakwood. Nineteen future projects will provide over 2,400 units. Global operators will hold 96% of future units. The 364-unit Somerset Metropolitan West Hanoi was acquired by CapitaLand and is expected to propel Hanoi’s West out of hibernation.

The West will continue to lead the villa and townhouse market in 2021 as it has improving infrastructure, several major projects and reputable developers, according to Savills Hanoi.

Infrastructure drives value in the West, including Thang Long Boulevard, To Huu-Le Van Luong Road, or BRT line, with in-progress projects such as Metro line 2A and 3, Ring Road 3.5, and the extended roads connecting the West with Hanoi’s core districts.

Main pending large-scale projects are ready to restart once the surrounding infrastructure is complete.

Recently, Vinhomes announced its launch of Vinhomes Wonder Park in Dan Phuong, and Vinhomes Co Loa in Dong Anh at the end of this year.

Small tenants tend not to move while the larger tenants with longer business strategy may plan for office expansion. The West will provide the greatest supply at 230,000 square meters, office supply will benefit from infrastructure.

He also added: “The increased supply in the West has been driven by the increase in infrastructure projects, the good quality of commercial and residential developments and relatively reasonable prices compare to other areas of the market.”

As rural and decentralized property in the globe has seen strong demand, this is a direct response from the Covid surge to move from high density cities as well as take advantage of the flexibility of the work from home model.

Hanoi is decentralizing, however, less from these international trends, and more from price and infrastructure drivers, he affirmed. 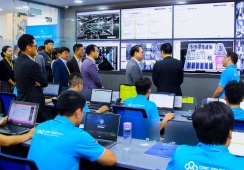