“In Her Voice” webinar aims at raising the call among men on providing women filmmakers’ specific needs to create networks and opportunities for them.

Difficulties of female filmmakers in their journey to international film festivals and access to cinema support funds were high on the agenda of a webinar entitled “In Her Voice” held in Hanoi on Oct 19.

The webinar, attended by Vietnamese and international speakers, was jointly organized the United Nations Educational, Scientific and Cultural Organization (UNESCO), the Embassy of Canada to Vietnam, and the Embassy of Switzerland in Vietnam on the occasion of the Vietnamese Women’s Day, which falls on Oct 20.

It is part of the “E-MOTIONS” project - Mobilizing film professionals for regional cooperation- conducted by UNESCO and its partners, with the support from the Japanese Funds-in-Trusts.

It aims at enhancing the capacity and empowerment of filmmakers and connecting domestic filmmakers with their peers in the region via a wide range of activities.

At the webinar, the participants offered insightful and diverse perspectives on the film industry and the difficulties and advantages that female filmmakers have to face.

Facing the fact that women filmmakers still meet many barriers in their careers and their voices are not really heard, the webinar wishes to understand the needs and aspirations of women filmmakers as well as create networks and generate new opportunities for them.

On the Vietnamese side, participating in the webinar were a couple of filmmaking directors Thanh Van - Nhue Giang, and director/producer Nguyen Hoang Diep. They brought to the event real experiences and stories of making films in Vietnam.

Apart from being a perfect assistant for her husband, director Thanh Van, Pham Nhue Giang also has authored excellent feature films. Some of her typical motion pictures are the “Coolie boy”, “Escape” and “The Deserted Valley”.

She stated that there are always certain difficulties for women when doing the “dual-task” of a director and a housewife. “But regardless of gender, in a film the director has only one common task: trying her best to create a perfect production,” Giang said.

The international perspective ideals at the webinar are shared by members of the expert panel of the UNESCO 2005 Convention - Yoonhyung Jeon from Korea, director/producer Anne Koizumi from Canada, and director/screenwriter Petra Volpe from Switzerland.

Speaking at the webinar, Christian Manhart, UNESCO Representative to Vietnam acknowledges the crucial role, great bravery, and resilient passion of women filmmakers despite the extra challenges they face in their careers.

“We look forward to seeing more excellent film products and wonderful awards from those inspiring women filmmakers,” he said.

According to H.E. Deborah Paul, Ambassador of Canada to Vietnam, the bilateral relationship between Canada and Vietnam is growing steadily and an important element of this relationship is the two countries’ people-to-people ties. “By sharing the works of artists, people gain a deeper understanding of each other,” she stated.

Also on this occasion, the Embassy of Canada in Vietnam introduced the talented Canadian filmmaker Anne Koizumi who virtually shared her journey to success in the event “In Her Voice”. Her film “In the Shadow of the Pines” won best short animation at the San Francisco International Film Festival, which then qualified the film for the 94th Academy Awards.

Meanwhile, the Embassy of Switzerland in Vietnam introduced a film entitled “The Divine Order” by Swiss filmmaker Petra Volpe. It is considered an excellent example of gender-focused and sensitive filmmaking. Moreover, the filmmaker’s own journey offers an insightful view into the challenges and passion required to be successful as a woman in the film business.

The highly applicable information and other in-depth discussions of the speakers at the conference have partly opened up opportunities for Vietnamese female filmmakers in the film industry in the future. 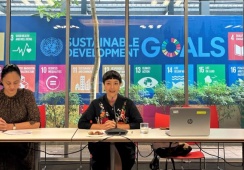