The estimated cost for all three stages of the project is 5.5 trillion won (US$5.18 billion).

Work has been kicked off on the Hai Lang liquefied natural gas (LNG) power center kicked off in Hai An Commune in the central province of Quang Tri’s Hai Lang District.

The project, covering an area of 120ha, will have a capacity of 1,500MW in its first phase and is able to supply 8.25 billion kWh to the national grid each year, Do Quang Hien, Chairman & CEO of T&T Group told the groundbreaking ceremony on January 15.

It will include a port capable of accommodating LNG carriers from 170,000 to 226,000 cu.m of gas and receiving 1.5 million tones of LNG annually.

Speaking at the ceremony, Chairman of the Provincial People’s Committee Vo Van Hung said the implementation of the project will contribute to materializing the goal of turning Quang Tri to be an energy hub in the central region by 2030.

He underlined these are projects that would create an important premise for building Quang Tri Economic Zone into a dynamic, modern, and efficient one in the Central region, the country, and ASEAN as well as a gateway for international exchange towards the East Sea of Vietnam.

Park Noh-Wan, Ambassador of the Republic of Korea to Vietnam, said this is a special project because it is the first to begin construction in the year that marks the 30th anniversary of the establishment of diplomatic relations between the two countries.

This is also the first project in the framework of climate change response within the cooperation between Vietnam and South Korea. Therefore, the Korean government considers it as one of the key programs to tighten the diplomatic relations between the two countries, Park Noh-Wan emphasized.

With an investment of US$2.3 billion, the project is funded by a consortium of Vietnam’s conglomerate T&T Group, Korea Gas Corporation (KOGAS), Hanwha Energy Corporation, and Korea Southern Power (KOSPO).

The project is divided into three phases. The first phase of Hai Lang LNG power center has been approved to be added to the adjusted Power Master Plan VII by the Prime Minister. The next phases will be considered in detail in the National Power Development Plan for the 2021-2030 period, with a vision to 2045.

Vietnam plans to expand its LNG power capacity to 4.1 gigawatts (GW) by 2025 and 59GW by 2045 to meet the surging power demand amid the rapid economic growth. 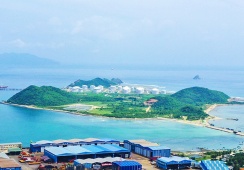