The Hanoitimes - Fire is set in stoves across the country to burn joss paper, votive boots, hats and other offerings for the Gods while living carps are released to ponds and lakes.

On the 23rd day of the twelfth month of the lunar calendar, which is today, the Kitchen Gods ride the carp to return to heaven and report to the Jade Emperor about the performance of the household over the year. On this occasion, Vietnamese people offers the Kitchen Gods joss papers (Hell Bank notes), fresh flowers, fruits as well as traditional dishes.

Fire is set in stoves across the country to burn joss paper, votive boots, hats and other offerings for the Gods while living carps are released to ponds and lakes. All in course of preparing a smooth journey to heaven for the Kitchen Gods.

This year, however, the votive offerings market is not bustling as in the previous years as consumers’ awareness on fire prevention and thrifty consumption has been heightened.

Instead of burning votive houses, cars, motorbikes to send them to the Kitchen genies, many have chosen to present the Gods with paper boots, hats and gowns. A set of such items costs from US$7 to US$15. According to the national radio the Voice of Vietnam (VOV), sales of votive offerings have fallen 20%. A trader said this year they have to turn to selling red carps to offset the plummeted sales of votive offerings.

Meanwhile sales of carp have risen exponentially by 60 to 70%. Three small red and yellow carps cost roughly a dollar while one single big carp would is priced two dollars.

The way of releasing carps also a controversial topic over the past few years as people are concerned that using too many plastic bags to carry carps may lead to a small environmental crisis.

As a result, a campaign raising people's awareness has been launched for years with some practical deeds such as installing signboards at the banks of some rivers or lakes to prevent the release of both carps and plastic bags into the waters. Volunteers collect garbage along the rivers and lakes where people flock to do their worshipping belief on this day among others.

Legend has it that, Kitchen Gods are believed two men and a woman including the God of Land, the God of House and the God of Kitchen are the guardians of the good or the bad fortune of a household, preventing the invasion of evils and bad things into the land. 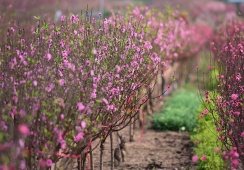