The Hanoitimes - Hanoi’s air quality index (AQI) measured at 10 monitoring stations in the city ranged from 58 to 197.

Air quality in Hanoi during the week ended November 9 at many automatic monitoring stations was mostly at the bad level and adversely affected human health, according to the Agency of Environmental Protection (EAP).

The agency said that Hanoi’s air quality index (AQI) measured at 10 monitoring stations in the city ranged from 58 to 197.

Monitoring stations such as Trung Yen 3, Kim Lien, Tan Mai, My Dinh and Tay Mo reported that air quality in the week worsened significantly compared to the previous week. Specifically, AQI at none of the stations reached a good level. The index was at a bad level in five days at Trung Yen 3 station, accounting for 71.4%, the rest was recorded at average level.

For monitoring stations such as Hang Dau, Hoan Kiem and Thanh Cong, air quality during the week remained similar to the previous week. Specifically, the number of days when the AQI was at the bad and average levels accounted for 71.4% and 28.6% of the week, respectively. However, AQI of Hang Dau station was quite bad, with the highest reading hitting 186 (equivalent to the AQI at the Pham Van Dong station).

It can be seen that air quality and weather conditions during the week are closely related to each other. It was mostly dry, less windy, the large difference in day and night temperature was detrimental to the diffusion of pollutants in the air, leading to AQI was mostly at bad level which adversely affects Hanoi’s residents’ health.

The EAP recommended that Hanoi’s residents should follow air quality information where they are living and working before going out to prevent diseases. 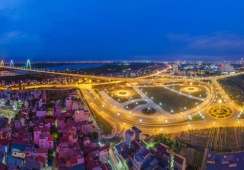