The Hanoitimes - Vietnam hopes that related parties will soon resume COC talks and finalize an effective and comprehensive COC that is consistent with international law and UNCLOS 1982.

The resumption of the negotiations on a code of conduct in the South China Sea is a priority of both ASEAN countries and China as the Covid-19 pandemic has hindered the countries from meeting face to face, Vietnam’s foreign ministry Spokesperson Le Thi Thu Hang has said.

Ms. Hang made the statement at a recent press briefing when asked to comment on reports of Filipino Foreign Secretary Teodoro Locsin stating that the country is “pushing as hard as it can” for the second reading of the negotiating draft and getting started on the COC talks before the country hands over the ASEAN-China country co-ordinator role to Myanmar next year.

Vietnam hopes that related parties will soon resume COC talks and finalize an effective and comprehensive COC that is consistent with international law and the 1982 United Nations Convention on the Law of the Sea (UNCLOS), the Vietnamese spokesperson noted.

ASEAN countries and China finished their first reading of the draft COC last year, while three readings are planned. Once effective, the code is expected to resolve conflicts in the resources-rich sea.

At an international press meeting on September 7 prior to AMM 53, Vietnam’s Deputy Minister of Foreign Affairs Nguyen Quoc Dung tipped that ASEAN countries and China had some working group-level meetings that focused on how to reconnect the COC talks and desired goals, but did not mention the content of such a code.

Vietnam’s top diplomat Pham Binh Minh said on September 9 that ASEAN was striving to formulate an effective and substantive COC that is in line with international law and UNCLOS 1982. 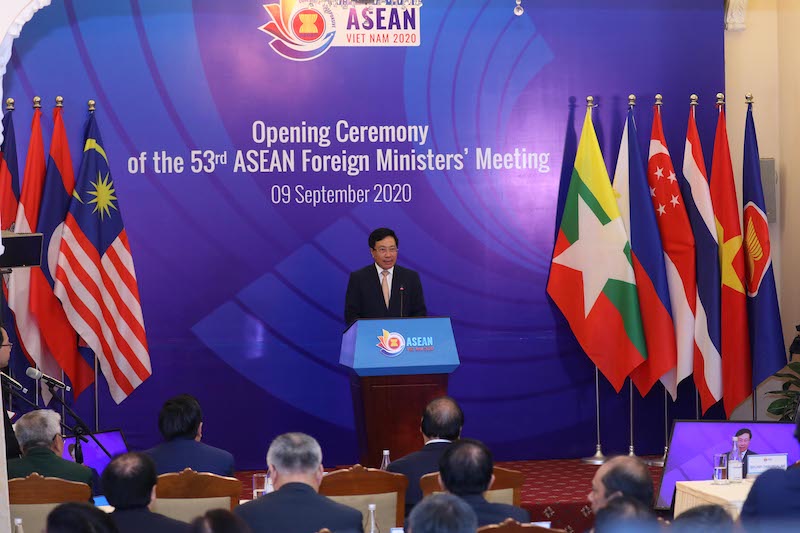