The Japanese company plans to build about 30 trade centers in Vietnam in the period 2021-2030.

Under a Memorandum of Understanding (MoU) signed on May 1 on the occasion of the two-day visit of Japanese Prime Minister Kishoda Fumio to Vietnam, the Dong Nai provincial People’s Committee will speed up the progress of the project’s construction, thereby contributing to meeting the demand of local consumers and the investor’s investment expansion in Vietnam.

Speaking at the ceremony, Vice Chairwoman of Dong Nai People's Committee Nguyen Thi Hoang said the locality will support the Japanese investors so that they could quickly finalize the legal procedures and start the construction of the commercial center soon.

She added: “We will create favorable conditions for connecting the project’s technical infrastructure  during the implementation and operation process.”

The company will develop raw material areas, and connect with local manufacturers and distributors so that Dong Nai’s spearhead products could be on AEON's shelves. It will also coordinate with the provincial authority to draw investments from its partners and other Japanese businesses into the locality.

Last November, the Japanese company signed MoUs with authorities in Thanh Hoa and Thua Thien-Hue provinces pledging an estimated investment capital of $170 million for each province. 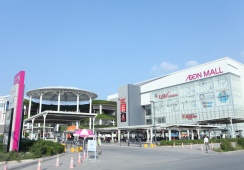