While Hanoi’s agricultural sector is the least affected by Covid-19, a growth rate of 3.5% of the city’s Index of Industrial Production in the first half of 2020 is the second highest nationwide.

Agricultural and industrial sectors are expected to play a key role in driving Hanoi’s economy forward in the remaining six months of 2020, according to senior officials of the capital city.

Agriculture is one of the least affected sectors during the Covid-19 pandemic, said Secretary of Hai Ba Trung district’s Party Committee Nguyen Van Nam at a meeting on June 30.

Nam suggested the city to continue reforming administrative procedures and focusing on addressing businesses’ concerns during their respective operation.

Meanwhile, the city should simplify procedures in public investment for faster disbursement.

As Hanoi’s gross regional domestic product (GRDP) is estimated to have expanded 3.39% in the first half of 2020, industrial production remained a spotlight of Hanoi’s economy with the Index of Industrial Production (IIP) growing at 3.5% year-on-year.

The rate is significantly lower than a rise of 7.4% recorded in the same period last year, but is the second highest nationwide, only behind Hai Phong, stated Director of Hanoi’s Department of Industry and Trade Le Hong Thang.

In the first scenario and also the most optimistic one, Hanoi could achieve a growth rate of 5.9%, 1.3 times that of the nation’s optimistic growth scenario, between 4.4% and 5.2%, if growth rates in the third and fourth quarters reach 7.8% and 8.4%.

Secretary of Hanoi’s Party Committee Vuong Dinh Hue said the city aims for an economic growth rate 1.3 times that of the national average and strives to fulfill the state budget revenue targets set by the National Assembly for this year. 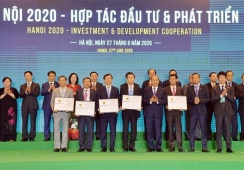