Hanh Phuc Rice Mill with a capacity of 1,000 tons of rice/day was inaugurated in the Mekong Delta province of An Giang, Vietnam with the attendance of President Nguyen Xuan Phuc, becoming the largest facility of its kind in Asia.

Covering an area of 161,000 square meters in Tri Ton District, which is surrounded by four other paddy-growing districts in An Giang and Kien Giang, the plant meets requirements of volume processed and processing time after harvest, keeping the best quality and fragrance of rice.

The paddy rice region where Hanh Phuc (Happiness) Rice Mill is located covers 300,000 ha, accounting for one-fifth of the paddy rice production area in the Mekong Delta, the rice granary in Vietnam.

The rice mill, located in the Mekong Delta Paddy Rice Institute and the hometown of famous rice brands ST25 by Ho Quang Cua, the world’s best rice, is expected to contribute to building “A An Rice” brand into a national brand and gaining international reputation, according to Sy.

Speaking at the inauguration ceremony on January 18, President Nguyen Xuan Phuc said the rice mill will not only help ensure the output for rice growers but also contribute to the national food security and increasing marketshare in the global rice market.

In addition, Phuc asked local authorities to expand the paddy growing area in Vietnam’s “rice bowl” with a special focus on agricultural mechanization.

Vietnam is one of the largest rice producers in the world. Most of the people who live in the provinces around the Mekong Delta are involved in rice cultivation. Around 82% of Vietnam’s arable land is used to cultivate rice.

In 2021-2022, the country likely exports 6.4 million tons of rice, according to the US Department of Agriculture (USDA). The Philippines remained the largest importer of Vietnamese rice, accounting for 36% of the total exports in 2020-2021.

Ten rice exporters in the world, including Vietnam, supply up to 90% of the global rice.

To ensure national food security, Vietnam vows to keep 3.5 million ha of arable land to cultivate rice that is estimated to produce 22 million tons of rice per year. 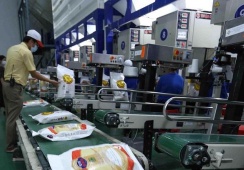