Banks forego over US$684 million for customers

Banks’ profits are expected to decline by a total of VND20.6 trillion (US$908.3 million) until late 2021 due to business support schemes during the pandemic.

A group of 16 local banks has so far foregone over VND15.5 trillion (US$684 million) in interest rates for customers affected by the Covid-19 pandemic in over three months.

Last July,  the Vietnam Banks Association (VNBA) suggested these banks, accounting for 75% of total outstanding loans in the economy, lower addition of 1% of lending rates on existing loans in the last five months of 2021.

All 16 banks have committed to foregoing around VND20.6 trillion ($908.3 million). As of late October, the State Bank of Vietnam (SBV), the country’s central bank, noted banks in question have so far cut over VND15.5 trillion ($684 million) in their profit from interest rates, or 75% of the total committed amount.

SBV Governor Nguyen Thi Hong noted the average interest rate has been lowered by 1.66% against the pre-Covid-19 period. Since the first outbreak in 2020, credit institutions and banks have cut lending rates worth VND30 trillion ($1.32 billion) and would continue to do so until late 2021.

In addition, banks also cut transaction and services fees of over VND2 trillion ($88.2 million) for customers and businesses, along with rescheduling debt payments for over 500,000 others with total outstanding loans of VND260 trillion ($11.5 billion).

While supporting customers affected by the pandemic remains a priority for the banking sector, Hong stressed the necessity to ensure the safe operation of banks amid rising bad debts.

“The SBV is working with other ministries and Government agencies in drafting new credit package for the economy, but at the same time keeping stable macro-fundamentals intact and controlling inflation,” Hong said. 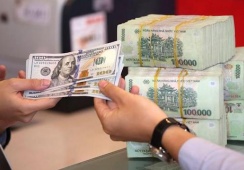 Vietnam banks restructure debts worth over US$24 billion during pandemic