Vietnam's Minister of Finance will visit Luxembourg soon to discuss the update of mutual agreements and address issues in regard to EIB-funded projects in the Southeast Asian country.

The Vietnamese government always seeks to strengthen its partnership with the EIB to carry out sustainability projects, including those related to green economy, environmental protection, climate change response, digital transformation and improving living standards, Prime Minister Chinh said at a meeting with EIB executives.

"I hope the two sides will see further improvements in implementing projects in fields where the EIB and Vietnam share similar concerns," Prime Minister Chinh said.

EIB and Vietnam should soon review and renew seven agreements that were ratified in 1997 as the circumstances have changed over the last 25 years, the Vietnamese government leader said.

Vietnam's Minister of Finance will visit Luxembourg soon to discuss the update of mutual agreements, and address issues in regard to EIB-funded projects in Vietnam, Chinh said.

He suggested that EIB provide concessional loans for Vietnam to carry out key projects in digital transformation, green growth, and circular economy development.

Vietnam expects concessional loans provided by the EIB to have lower interest rates than those given to developed nations, he said.

Speaking at the meeting, EIB vice chairman Kris Peeters said that the European bank will work with the European Union to discuss future plans to foster the relationship with Vietnam.

The EIB will also work with Vietnamese officials and specialists to review its Vietnam-based projects as suggested by PM Chinh, and speed up the preparation of upcoming projects, Kris said.

Kris added that the EIB will strive to strengthen the partnership with the Vietnamese Government as the country plays an important role in the region, and that the bank will soon be present in the country.

Markus Berndt, CEO of EIB Global, said that the bank is willing to work with Vietnam on future projects with a focus on digital transformation, green energy transition, and climate change response.

He stressed that the EIB and Vietnam share similar concerns and that the European bank will simplify administrative work and strive to promote the relationship between the two sides.

During the meeting, the Vietnamese utility group Vietnam Electricity (EVN) and the EIB signed a memorandum of understanding (MoU) to enable the EIB to provide financial support for sustainable energy projects in Vietnam, strengthen cooperation in electricity production, storage, transmission, distribution and sales, and help Vietnam implement its carbon-free energy transition process.

Peteris Ustubs, European Commission’s Director of Finance, said the agency will do its best to support Vietnam in sustainable development, especially regarding its commitment to a net zero emission.

The cooperation between Vietnam and the EU in energy and power transition has progressed in recent years, he said, adding the European Commission will support Vietnam to soon achieve a successful energy transition.

According to PM Chinh, Vietnam is in need of huge finance to develop its legislative system, infrastructure, and manpower. The nation eyes the development which is powered by internal elements with financial support from international communities.

Luxembourg’s economic officials and business executives on December 9 expected to establish and strengthen their presence in Vietnam.

Carlo Thelen, Director General of the Luxembourg Chamber of Commerce, stated that Vietnam is the country's ninth-largest non-EU trading partner and that business turnover between the two sides has increased at a great pace in recent years.

He said Vietnam has the potential to become the world's new manufacturing and production center thanks to a market of 100 million people and a resourceful labor force.

Tourism is also a sector that the two nations that will see further cooperation, Carlo said, adding he is impressed with the Vietnamese tourism sector’s theme “Vietnam – the hidden charm”.

Luxembourgish enterprises also expressed their ideas to set up and expand their operations in Vietnam, including biology firm B-Medical Systems and air freighter CargoLux.

B-Medical Systems, specializing in medical technology and pharmacy, hoped to strengthen its cooperation with Vietnam’s Ministry of Health and the National Institute of Hygiene and Epidemiology in the supply of medical cold storage and prepare the country to cope with potential diseases.

For his part, PM Chinh welcomed the feedback of Luxembourgish companies, suggesting they focus on green economy and environmental protection in Vietnam, while promising incentives for investment in healthcare services and air transportation.

PM Chinh said that Vietnam with political stability, social security, independence and sovereignty is an ideal destination for foreign investors.

The Vietnamese Government will improve the legislative structure for foreign investors to enjoy a good environment and spending cuts, he said.

Vietnam hopes to attract international investors to the country based on a win-win risk-sharing principle that balances the interests of the State, the people and businesses, the Vietnamese government leader said.

On December 9, Prime Minister Chinh also attended the signing of several agreements between organizations and businesses of the two countries.

Vietnam and Luxembourg began diplomatic relations in 1973. Luxembourg runs 58 active projects in Vietnam with a total registered capital of US$2.6 billion in the fields of information and telecommunications and real estate.

The grand duchy is the 17th largest foreign investor and the third largest European investor in Vietnam.

The meetings were on Prime Minister Chinh's agenda during his official visit to Luxembourg, the Netherlands, and Belgium from December 9-15. 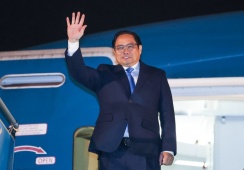