The exhibition presents photographs and documents related to the birth of the Communist Party of Vietnam and its leadership in the cause of national liberation.

An exhibition titled “Our Great Party” was inaugurated on January 18 by the Ministry of Culture, Sports and Tourism to celebrate the 91st founding anniversary of the Communist Party of Vietnam (February 3, 1930-February 3, 2021) and the 13th National Party Congress.

The event, takes place from January 18-24 at the Vietnam Art and Cultural Exhibition Center, No. 2 Hoa Lu, Hai Ba Trung district, Hanoi, is aimed at praising the leading role of the Communist Party of Vietnam in the process of national liberation and construction as well as the achievements of the country during the past years.

This is also an opportunity to disseminate and educate traditional patriotism, revolutionary struggle, faith and pride in the Party and Uncle Ho among people from all walks of life, especially the young generation.

The exhibition presents photographs and documents related to the birth of the Communist Party of Vietnam and its leadership in the cause of national liberation, as well as the process of building and defending socialism in Vietnam.

There are also two thematic displays called “The contribution of the army and the people's public security forces in the cause of building and defending the fatherland of the Socialist Republic of Vietnam” and “The Vietnamese Youth proudly advance under the glorious Party’s flag".

In addition, the exhibition also shows about 200 publications about the struggle of the Vietnamese people for national independence in the past and the current process of national construction and defense; and the country's achievements in the process of renewal, development, and international integration under the leadership of the Communist Party.

The exhibition also displays nearly 60 propaganda posters in celebration of the 13th National Party Congress that will be held in Hanoi from 25 January to 2 February, 2021. 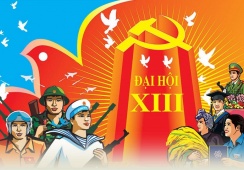