Many products and goods of ethnic groups and mountainous areas have been exported to foreign markets.

This is part of the city’s implementation plan of the National Target Program for Socio-economic Development in the Ethnic Minority and Mountainous Areas in the 2021-2030 period.

The total investment capital for the first phase (2021-25) is VND2.1 trillion (US$84.6 million). Under the plan, in the entire region there will be no poor households by city standards. At the same time, 100% of the communes where ethnic minorities live will meet the new rural standards.

Hanoi, in collaboration with many other localities, continues to intensify comprehensive socio-economic development of mountainous areas and those where the ethnic minorities live and narrow the gap in living standards and income of ethnic minorities compared to rural areas, in order to achieve the national target program.

One of the cooperation activities is the establishment of retail outlets selling products and goods from mountainous areas and those where the ethnic minorities live across the country, said Deputy Director of the Domestic Market Department under the Ministry of Industry and Trade Le Viet Nga.

Nga added that the support of large distributors including Thailand’s Central Retail and MM Mega Market, Vietnam's Saigon Co.op, and WinMart has brought effective results for the consumption of products in rural and mountainous areas.

For instance, Central Retail has coordinated with the ministries of Industry and Trade, and Agriculture and Rural Development to implement a program to guide ethnic minorities to produce qualified products which are sold at the supermarket system.

“Through such activities, we see the role of modern distribution systems to support the consumption of products and goods of the mountainous people,” Nga noted.

Sharing about developing the market for goods of ethnic minorities, Pham Thi Viet Ha, Deputy Director of Hanoi-based Tay Bac Tea and Special Food Co., Ltd, said: “Foreign tourists to Vietnam are considered potential consumers of the specialties of our mountainous region, especially the guests of local homestay establishments." The company has invested in a tea growing and processing factory in Ta Xua, Bac Yen District in the northern province of Son La.

According to the Ministry of Industry and Trade, many products and goods of from those regions have been exported to foreign markets.

These businesses are looking for organic products, which are grown in ethnic minority areas, or handicraft products, including bamboo and rattan, brocade, and handmade items by those people. 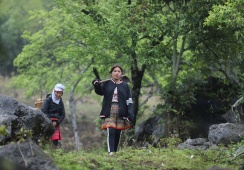 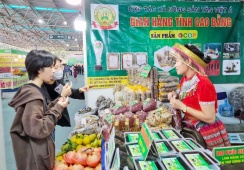