With some 100,000 Vietnamese people living in Berlin and neighboring regions, a direct flight connecting Hanoi and Germany's capital city has great potential.

The German Association of Small and Medium Enterprises (BVMW) on November 28 urged the early opening of a direct flight connecting Hanoi and Berlin.

Andreas Jahn, a member of the Federal Executive Board of the BVMW, said that the direct flight linking Hanoi with Berlin would meet the market demand.

A total of 100,000 Vietnamese people are living in Berlin and neighboring regions, including some 30,000 people staying in the capital city of Germany, he told a meeting with the Vietnamese delegation led by Nguyen Thi Tuyen, Permanent Vice Chairwoman of the Hanoi Party Committee during their visit to Germany.

The BVMW, with 960,000 German small and medium-sized companies and 75 representative offices across the world, is highly interested in the Southeast Asian market, including Vietnam, the German official said.

Thus there is a lot of potential for direct flight to thrive, he said, referring to the immense demand for traveling between the two nations.

Economic cooperation is one of the priorities in the Vietnam-Germany strategic partnership, Hanoi Party Committee’s vice chairwoman Tuyen said, adding Germany is one of Vietnam’s major trade partners in Europe.

She appreciated that the BVMW had actively promoted the partnerships between Hanoi-based companies and their European and German peers.

Tuyen urged the association to give more assistance to help promote trade and investment activities between Hanoi and German localities, especially regarding Hanoi's key exports.

The Vietnamese official hoped that the governments of the two capital cities would foster their bilateral partnership in all fields on the mutual concern.

She expected German partners to further support the development of science and technology, education and training, heavy industries, trade, and tourism in Hanoi.

Specifically, Tuyen called on Berlin authorities to facilitate access to scholarships and short-term training courses for Vietnamese students and to help businesses on both sides take full advantage of the EU-Vietnam Free Trade Agreement (EVFTA).

Permanent Secretary at Senate Department for Economics, Energy and Public Enterprises of Berlin, Michael Biel, said that Berlin authorities always seek to expand the relationship with Hanoi in all fields.

He hoped the visit of the Vietnamese delegation would propel mutual growth and further cooperation between the two cities on the 50th anniversary of the establishment of the Vietnam-Germany diplomatic relations in 2025.

Most German projects in Hanoi focus on science and technology, retail, the processing and manufacturing industry, and information and telecommunication. Hanoi’s key exports to Germany are rice and aquaculture products. 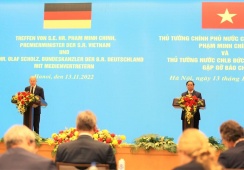 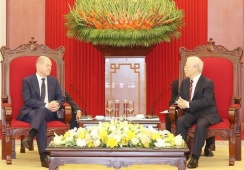