The tourism industry in Hanoi will focus on improving the capacity of human resources to secure the quality services in the coming time.

To reboot the tourism industry, the Hanoi Department of Tourism is calling on businesses, organizations and individuals in the city to comply with anti-Covid-19 protocols to ensure Hanoi is a safe and secure destination.

The department has worked with the Vietnam and Hanoi tourism associations as well as relevant agencies to update the Covid-19 situation. It has also suspended some stimulus activities in August until the appropriate time.

The city's tourism authority is requesting hotels, restaurants, destinations and airline ticket agencies to refund the advance payment to tour operators so that the latter can return the money to customers who had to cancel their trips due to the resurgence of Covid-19.

As of now, 38 travel agencies in Hanoi have received 33,453 cancellations.

At tourist attractions, the number of visitors has dropped sharply from 75% to 80% since the outbreak reemerged.

In September, the Department of Tourism is expected to submit to the city People's Committee for approval the concept design, the design of signage system, the brand identity of the craft village and souvenir gifts in Hanoi.

At the same time, the department will build and implement a plan adopted by the city People's Committee on e-commerce development for the 2021-2025 period in Hanoi for the tourism industry.

Due to the Covid-19 outbreak in Danang city late in July, the number of domestic tourists in August to Hanoi decreased by 71.3% compared to July, to 295,000.

Consequently, revenue from domestic and inbound tourism was VND753 billion (US$32.2 million), down 75.3% against July and 91.2% from a year earlier.

In the first eight months of 2020, visitors to Hanoi plunged 67.3% from a year earlier to 6.29 million. Of the amount, international arrivals are estimated at 1.02 million while the number of domestic tourists totaled 5.27 million. Revenue from tourism was VND22.7 trillion (US$972.7 million) in this eight-month period.

During January – August, the average occupancy rate of star rated hotels were estimated to reach 29.6%, down 40.8% compared to the same period last year. 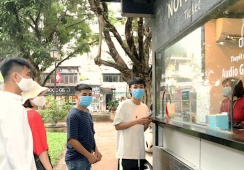