Hanoi’s 2020 gross regional domestic product (GRDP) growth is estimated to reach 3.98% year-on-year, which came as a result of the strong economic recovery in the fourth quarter with an estimated economic expansion rate of 5.77%.

The figure was released by Chairman of the Hanoi People’s Committee Chu Ngoc Anh at a national conference between the government and provinces/cities on December 28.

“The year of 2020 has evidenced Vietnam’s strong will to overcome challenges and difficulties,” stated Mr. Anh, referring to the country’s success in realizing the dual target of both containing the pandemic and boosting economic recovery.

Vietnam’s economic growth in 2020 could reach 2.91% year-on-year, which stays among the highest in the world.

In line with the Government’s efforts, Hanoi has been focusing on the fight against the Covid-19 pandemic and setting up plans to ensure strong economic rebound in the post-pandemic period, noted Mr. Anh.

Overall, Hanoi’s economic size is calculated at US$44 billion. Other key results of the local economy included a state budget revenue of VND280.5 trillion (US$12.14 billion), exceeding the year’s estimate and up 3.9% year-on-year. Hanoi has also tightened spending and saved over VND3 trillion (US$130 million).

The city’s disbursement progress of public investment fund reached over 93% of the target, or VND45 trillion (US$1.94 billion).

In 2020, Hanoi set aside 49% of the State budget for capital expenditure and the remaining amount for regular spending.

Along with efforts to boost economic growth, Hanoi has created 18,600 new jobs, 16% above the plan and reduced the unemployment rate to 2.3%.

Among the highlights of the year is the city’s successful hosting of the “Hanoi 2020- Investment and Development Cooperation”, which was demonstrated by the participation of nearly 2,000 delegates and over US$17.6 billion in investment capital committed by both foreign and domestic investors, proof of Hanoi’s attractiveness as a secure and stable investment destination.

In 2021, Hanoi has set up 23 criteria for socio-economic developments, including the GRDP growth target of 7.5%.

“Right in the first month of next year, the Secretary of the Hanoi Party Committee and other leaders in Hanoi will hold a meeting with 30 districts in the city to put the socio-economic development plan into motion,” noted Mr. Anh. 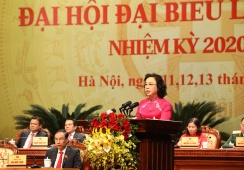