Mr. Nguyen Duc Chung will be detained for four months to serve the investigation of at least one criminal case.

Police executed a search warrant in his residence and office in Friday evening.

Mr. Chung will be detained for four months to serve the investigation of a case in which he is accused of appropriating state secret documents stipulated in Article 337 in the 2015 Penal Code.

Earlier in late July, police arrested three involvers of the case who are Mr. Chung’s driver, one of this secretaries at the Hanoi People’s Committee Office, and a police officer of the Ministry of Public Security.

Earlier on August 11, Chairman of the Hanoi People’s Committee Nguyen Duc Chung was suspended from his duties for 90 days due to his engagement in three criminal cases, including “Smuggling, violations of accounting regulations causing serious consequences; money laundering; breaches of bidding regulations causing serious consequences” at Hanoi-based Nhat Cuong Co., Ltd; (2) “Violations of regulations on management and use of state assets causing loss and waste” in the Hanoi People’s Committee and relevant agencies; and (3) “Appropriation of state secret documents” in Hanoi.

Born in 1967 in the northern province of Hai Duong, Mr. Chung held the position of Hanoi’s mayor in December 2015 after he spent almost two decades working as a policeman. 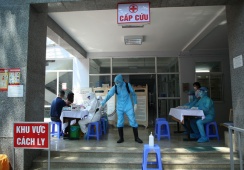