Hanoi is asked to make greater efforts in Party building, personnel development and discipline enhancement, in order to deserve its position as the nation's political and cultural center.

Hanoi must set an example in all aspects, Vietnam News Agency quoted General Secretary of the Communist Party of Vietnam and State President Nguyen Phu Trong as saying at a meeting between the Politburo and the city’s Party Committee on September 19.

Mr. Nguyen Phu Trong said that Hanoi needs to make greater efforts in Party building, personnel development and discipline enhancement, in order to deserve its position as the nation's political and cultural center.

The Party chief also asked the capital city to expand its relations with foreign counterparts, fully harness the support of the central government and coordinate with other localities for development.

Regarding the upcoming 17th Party Congress of Hanoi (2020-2025 term), Mr. Trong proposed the Hanoi Party Committee to take in the opinions of the Politburo for a thorough, serious and scientific preparation of the documents and personnel.

The Politburo lauded that during the current term, the Hanoi Party Committee has fulfilled all of the 16 criteria set at the 16th Party Congress, among them, attaining an economic growth higher than the national average and improved growth quality.

Outstanding achievements have been made in attracting foreign investment that hit US$25 billion in 2016-2020, 3.9 times higher than the previous tenure.

Hanoi should gear towards regional and international development standards, and work to promote its locomotive role as well as its position as an international gateway of the country, the Politburo said. 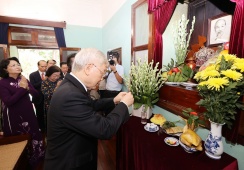