Hanoi promises support to boost Can Tho tourism

Hanoi and Can Tho signed a Memorandum of Understanding (MoU) on the two cities’ cooperation to develop the tourism sector.

The capital city of Hanoi pledges to provide utmost support for the southern city of Can Tho in tourism development to boost local socio-economic growth, Vice Chairman of the Hanoi People’s Committee Nguyen Manh Quyen said on October 20.

Hanoi and Can Tho have long worked together in tourism development, and the two major cities have their specific tourism products with prominent features, Quyen told a conference that was held to boost Can Tho's tourism in Hanoi.

The Hanoi official said that the two cities need to connect their value chains to make the products more attractive to visitors.

"Hanoi pledges to strengthen its tie with Can Tho in tourism development to boost the socio-economic development of the two cities and the country," Quyen said.

Vice Chairman of the Can Tho People's Committee Nguyen Thuc Hien said that tourism would become the key economic sector and account for a large part of the city's gross regional domestic product (GRDP).

In addition, the city targets to develop high-quality, diverse and competitive tourism products; become an attractive destination in the country and Southeast Asia, Hien said.

"Key tourism products of the city include river tours, conference-workshop travel, and cultural exploration," he said.

Can Tho would increase spending to improve mass infrastructures such as hotels, restaurants and entertainment facilities; improve the quality of human resources; and assure the quality of touristic activities for both domestic and international travelers, he added.

At the conference, the city of Can Tho introduced the images of local tourism to the people of Hanoi and looked for further exploration of the Can Tho-Hanoi flight route. Travel companies from both cities exchanged ideas and information to seek potential partners and other opportunities in the two local areas.

Can Tho also had an exhibition to present outstanding tourism products, local souvenirs and specialities. The representatives of the southern city also visited several specific sites in Hanoi and Ninh Binh Province.
At the conference, Hanoi and Can Tho signed a Memorandum of Understanding (MoU) on the two cities' cooperation to develop the tourism sector.

According to the Can Tho Department of Culture, Sports and Tourism, the city locates in the center of the Cuu Long Delta Region with well-developed transportation infrastructure and a wide range of entertainment activities for tourism development.

In January-September, Can Tho received more than 4.3 million visitors, up 111% on-year, and earned nearly VND3.1 trillion (US$124.8 million) in revenue.

TAG: Hanoi can tho tourism travel 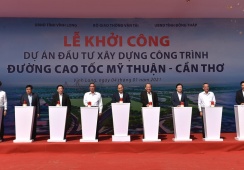 Vietnam starts construction of My Thuan – Can Tho expressway 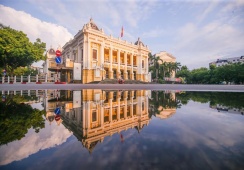