Vietnam and Cambodia remain close neighbors with strong ties at both governmental and people levels, covering various fields from the economy, culture, and politics to diplomacy.

Hanoi always cherishes and strives to improve its relations with Phnom Penh, contributing to the Vietnam-Cambodia partnership.

Chairman of the Hanoi People’s Committee Tran Sy Thanh said during a conference with Phnom Penh Municipal Governor Khuong Sreng, who is on a visit to the capital city from September 4-6.

At the meeting, Thanh expressed his delight at welcoming Phnom Penh’s high-ranking delegation to the city at a time when both countries are celebrating the 55th anniversary of diplomatic relations (June 24, 1967 – June 24, 2022).

According to Thanh, throughout history, Vietnam and Cambodia remain close neighbors with strong ties at both governmental and people levels, covering various fields from the economy, culture, and politics to diplomacy.

“On this foundation, Hanoi is constantly trying to improve the partnership between the two capitals,” Thanh said.

Thanh noted Hanoi is the country’s political, economic and cultural hub with a population of nearly nine million.

“Amid rapid urbanization process, the city is facing numerous challenges in urban and environmental management,” he continued.

Thanh referred to Politburo’s decision No.15 on May 5, 2022, on the development vision of Hanoi until 2030, with a vision to 2045, as the political foundation to map out the city’s future growth.

“On this basis, the city is working on two major plannings for Hanoi’s development, scheduled to be completed by the third quarter of 2023,” Thanh said.

Meanwhile, Hanoi has now fully recovered from the severe Covid-19 impacts in 2021, and is now firmly on track for recovery with a GRDP growth of 7.79% during the first six months of 2022, the mayor added.

He attributed the positive economic performance during the first months of 2022 to the Government’s reopening strategy, which has built confidence among investors, people, businesses, and tourists.

Regarding foreign affairs, Thanh expected Hanoi to continue expanding its relations with other cities around the world, especially in Indochina, saying the city’s leaders are committed to further bolstering the Vietnam-Cambodia partnership.

“People-to-people diplomacy and cooperation between social organizations are the foundation for a sustainable and long-term partnership of the two cities,” Thanh said.

Khuong Sreng also conveyed his sincere thanks to Hanoi’s leaders and people for providing support for Phnom Penh over the years, especially during the Covid-19 outbreak.

Stressing the importance of the long-standing Vietnam-Cambodia relations for the mutual benefit of the two peoples, Khuong Sreng suggested both capitals maintain communication channels to ensure greater understanding, continuing the tradition laid down by President Ho Chi Minh and King Norodom Sihanouk, as well as current leaders of both countries in pushing for stronger relations.

Khuong Sreng stressed the fact that as two countries had joined hands to gain independence in the past, both need to stay close in socio-economic development in the current context, especially during the unpredictable regional and global situation.

He called for the two capital cities to strengthen cooperation in all fields, especially economic and social development. 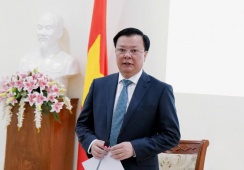