Demand for farm produce in the festive period is expected to rise by 20-30%, for which Hanoi’s agricultural sector is taking measures to ensure no shortage in the market.

Authorities in Hanoi are taking steps to boost agricultural production in anticipation of increased demand during the upcoming Lunar New Year 2023 or Tet holiday, the biggest festive period of the year.

Director of the Van Duc Agricultural Services Cooperative Nguyen Van Minh said since late September, they have been expanding vegetable production, such as cabbages, tomatoes, or broccoli, to meet market demands.

"The cooperative normally produces around 40 tons of vegetables per day, but two months before the Lunar New Year, the capacity would be expanded to over 50 tons per day," Minh told The Hanoi Times.

He added that 70% of the farm produce is distributed at supermarkets and wholesale markets in Hanoi and the remaining in neighboring provinces/cities, noting the figures are calculated based on the cooperative's market demand and production capacity.

In a similar situation, Dong Tam Livestock Cooperative in Quoc Oai District focuses on raising 300 pigs to meet orders from supermarkets and convenience stores under contracts signed between now and Tet.

The cooperative provides 30 tons of porks and four to seven tons of sausages and pastes to the market every month.

A report from the Hanoi Department of Agriculture and Rural Development suggested the city’s pork supplies are sufficient for local consumption. However, the Department would closely monitor the market prices and the supply-demand balance to ensure there is no shortage in the market.

According to the Department, the prices of most agricultural products in Hanoi remain stable. However, around the time of the Lunar New Year, local demands for essential commodities, such as pork, beef, chicken, or vegetables, would surge.

It, therefore, called for distributors and local producers to assess the market and prepare plans to cope with rising demand in the festive period.

Based on the production capacity of farm produce in Hanoi, the local authorities would closely cooperate with 21 provinces/cities to provide quality food products through 159 local supply chains.

Hanoi would also promote provincial linkage in farm production to maintain a sustainable and sufficient supply for Hanoi.

Vice Director of Hoa Binh Province’s Department of Agricultural and Rural Development Vuong Dac Hung said many specialties in the province are well-known in Hanoi.

Currently, cooperatives and farm producers in the provinces are gearing up production, especially of fish from Da rivers, Cao Phong oranges, Tan Lac grapefruits, or organic vegetables, to supply Hanoi during the festive periods.

Along with sufficient supplies of quality farm produce, the Director of Hanoi’s Department of Agricultural and Rural Department, Chu Phu My, said the authorities are working on plans to prevent low-quality products from being distributed in the market.

“On the other hand, Hanoi’s agricultural sector would support local producers to adopt modern and quality food control processes of global standards, such as GAP, HACCP, or ISO 22000,” My told The Hanoi Times. 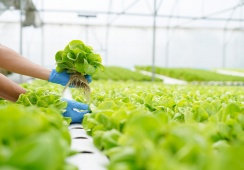