Hanoi strives to ensure food safety amid the pandemic

As reopening eateries in Hanoi after the Covid-19 pandemic is gradually put under control, ensuring food safety has been the priority task of the municipal authorities.

Besides, functional forces and the People's Committees of districts have strictly controlled food products in the city and inspected the compliance of food business establishments, especially at markets, supermarkets, and trade centers.

From October 14, Hanoi has allowed restaurants and eateries to resume activities but with no more than 50% of seats and provided that they ensure the distance among clients, install screens among seats, get the staff fully vaccinated, and ask customers to scan QR codes to register their visit.

Hanoi's functional forces have also set up inspection teams to check food hygiene and safety amid the pandemic.

“The inspection results have shown that the eateries have a good sense of compliance with administrative procedures as prescribed by law,” Ha told The Hanoi Times.

However, she also pointed out the fact that there remains establishments who sell imported goods without labels and food preservation conditions, some lack separate protective equipment for raw and cooked foods.

“Currently, the district functional forces have been focusing on controlling commercial centers, supermarkets, and amusement parks. They will thoroughly handle violations of food safety regulations in order to raise people's awareness on food safety," Ha added.

Many violations of food safety have been detected and strictly handled by the Hanoi authorities.

Their infractions were lack of valid certificate of food safety, trading goods of unknown origin, and non-compliance with hygiene rules when processing food such as not wearing facemasks and gloves.

In April, the department's Inspectorate and police detected a case of injecting impurities into shrimp in Yen So Ward, Hoang Mai District. The violator was imposed a fine of VND60 million (US$2,635).

The department's Inspectorate also uncovered a violation of a regulation on the production and trading of chemicals to treat the aquaculture environment and fine the offender VND90 million (US$3,952).

The total fine has amounted to VND400 million (US$17,565) from the beginning of the year. Besides a stern warning, the municipal authorities have encouraged people to abide by the law.

Deputy Director of the Hanoi Department of Agriculture and Rural Development Nguyen Ngoc Son told The Hanoi Times that his department will continue to closely coordinate with the relevant city's departments in developing and implementing annual specialized inspection plans, avoiding overlaps and duplication of duties.

The department will strengthen training to improve the capacity of the food safety management team at all levels, Son noted, adding that promoting the dissemination of the food safety law to all people would be the priority in the time ahead.

Son stressed that from now until the end of 2021, the situation of food safety is expected to be more and more complicated due to the increased demand for food during the holidays.

Therefore, the Hanoi Department of Agriculture and Rural Development will continue to direct subordinate units to closely enforce regulations on food safety in production establishments to ensure people's health and safety. 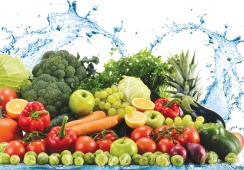