A tourism development forum with the participation of Hanoi, Ho Chi Minh City and major provinces/cities in the central region, is slated to take place in Quang Nam province on November 27-28.

The Departments of Tourism, Culture and Sports of Hanoi, Ho Chi Minh City, Danang, Quang Nam and Thua Thien-Hue on November 6 held an online meeting to discuss the organization of a tourism development forum gathering provinces and cities across Vietnam.

The forum is slated to take place in Quang Nam province on November 27–28.

In the first day of the forum, there will be meetings and discussions among tourism companies from Hanoi, Ho Chi Minh City, Danang, Quang Nam and Thua Thien-Hue; the launch of a tourism exhibition space, including travel destinations, tourism products and local specialties, among others.

On November 28, the Ministry of Culture, Sports and Tourism in collaboration with tourism management agencies of 63 provinces and cities would organize a national conference on tourism.

At present, Hanoi has been preparing for tourism promotion activities that would be held at the forum.

Meanwhile, the capital city is scheduled to hold a press conference about the forum during the Vietnam International Travel Mart (VITM) – Hanoi 2020. 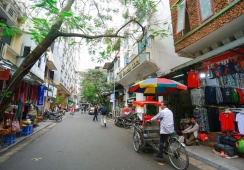