Under the proposal, the city in the North of the Red River would have a total area of 700 square kilometers, consisting of rural districts of Dong Anh, Soc Son, part of Me Linh, and Gia Lam.

The “city within city” model in the North of the Red River remains a highlight in Hanoi’s master plan for development until 2030, with a vision to 2050, but should be carried out in a cautious manner, according to experts.

Director of the Hanoi Urban Planning Institute Luu Quang Huy referred to a recent study from the Institute that once five rural districts of Hoai Duc, Dong Anh, Thanh Tri, Gia Lam, and Dan Phuong become urban ones by 2025, the total urban area in Hanoi would be expanded by 38%.

According to Huy, another issue would be the huge budget for infrastructure development in urban areas in the city of VND2,400 trillion ($105.6 billion), 26% higher than the current plan.

“This would no doubt impact the budget allocated for satellite urban areas and subsequently their development progress,” he told The Hanoi Times.

In this case, Huy noted building a city in the North of the Red River in Hanoi, spreading across  Me Linh, Dong Anh, and Soc Son districts under the model of “city within city” could be a viable option.

“The move could be considered as a transition step to relieve pressure on Hanoi’s already-strained budget for infrastructure development,” he added.

Huy pointed out the fact that the North of Red river remains a gateway to the capital metropolitan area of Hanoi – Vinh Phuc – Bac Ninh, which consists of the Noi Bai International Airport and is also part of the economic corridor Kunming (China) – Lao Cai – Hanoi – Haiphong – Quang Ninh.

“Becoming a city would give the authority flexible mechanism to attract investment for development, thanks to its independent nature compared to an urban city status,” he said.

In addition, the new city could take advantage of the existing infrastructure system, including roads, airports, industrial parks, and new residential areas including Vinhomes Riverside, Vinhomes Ocean Park, as well as the support from the central urban area thanks to its close proximity.

Experts, however, warned Hanoi to have a clear plan and stay cautious about adopting a “city within city” model, due to numerous requirements for a city.

Vice President of the Vietnam Urban Planning and Development Association Dao Ngoc Nghiem added such a model has been recognized in Vietnam since 2016.

Referring to Thu Duc city within Ho Chi Minh City as a reference point, Nghiem noted these areas have undergone a long period of urbanization and have gathered sufficient conditions to become a city.

As Hanoi is targeting to raise the urbanization rate to 62% in 2025 from the current 40%, he said the city could either expand the metropolitan areas or build new urban areas in its surroundings, instead of setting up a new city.

“Criteria for a locality to be considered an urban district is totally different from those for becoming a city,” he told The Hanoi Times.

Sharing Nghiem’s view, Chairman of the Hanoi Urban Planning and Development Association To Anh Tuan said the idea is not new, as the existing planning has mentioned Hoa Lac as Hanoi’s satellite city.

“There is a lack of a comprehensive plan in building a city in the North. In the case of the Thu Duc city, this area has been clearly defined as a creative city and a concentration hub of the hi-tech and training center of the high-quality workforce,” he told The Hanoi Times. 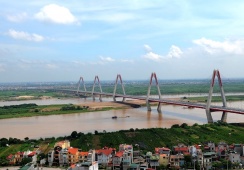