Hanoi and the Wallonia region of Belgium are working to promote their partnership in 3B bull husbandry.

Hanoi’s vice chairman Nguyen Manh Quyen said on November 2 that the Belgian company GABelgimex will continue to assist Hanoi and other Vietnamese provinces to raise Blanc Blue Belgium (3B) bulls.

Quyen, while leading Hanoi's business tourism delegation to visit GABelgimex's facilities in Belgium's Wallonia region, also appreciated the cooperation between GABelgimex and Hanoi over the past decade in breeding high-yielding 3B bulls, which has brought good income for local farmers.

The visit is a part of the Hanoi delegation's business trip between October 27 and November 4, 2022.

The 3B bulls, also known as the “double-muscling” breed, can weigh over 1,000 kilograms each. The species can offer high-quality breeds for cattle farmers in Belgium and other countries.

Vice President and Minister of Economy, Foreign Trade and Agriculture of Wallonia Willy Borsus spoke highly of the cooperation between GABelgimex and its Vietnamese partners, especially after Vietnam and Belgium set up a strategic agricultural partnership in 2018.

The Wallonia region, with superior advantages in high-tech agriculture, is willing to strengthen its cooperation with Vietnamese localities in agriculture and animal husbandry, Willy told the Vietnam News Agency.

During the visit, GABelgimex and the Hanoi Livestock Breeding Joint Stock Company signed an agreement that enables the former to import 3B bulls to Vietnam to improve cattle quality in Hanoi and other provinces of the Red River Delta Region.

According to GABlegimex representative Christophe Cailteux, Belgium tops the world with high-quality breeds such as bull, pig, and sheep. With the adoption of technological advancements in farming and production, Belgimex is willing to expand its partnership in Vietnam.

Phong also said that the hybrid breed grows fast and adapts well to the environment of Vietnam, helping local farmers earn high incomes. A full-grown muscle bull can weigh up to 1.4 tons and put on one to two kilograms daily, with a meat percentage of 75%.

In 2001, Hanoi Livestock Breeding JSC studied 3B bulls for herd development in Vietnam. In February 2012, the Hanoi People's Committee gave the go-ahead for the company to launch the project, which crossed 3B bulls with Sind cows to produce a new strain of bull to be raised in eight districts in Hanoi, including Ba Vi, Soc Son, Gia Lam, Phu Xuyen, Dan Phuong, Phuc Tho, and Thach That.

More than 30,000 local households have participated in the project, and more than 260,000 crossbred calves have been raised. Vietnam has high-yielding 3B bull farms with 100-200 heads each. 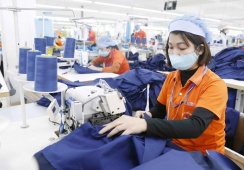 Hanoi delegates seek business cooperation in the US, Belgium 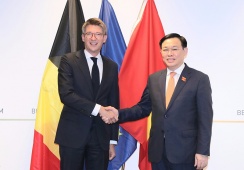