Hanoi stops all businesses on the railway: Officials

The city is set to close all shops and prohibit tourism activities along the railway until further notice to assure traffic safety and the lives of people.

Hanoi will suspend all business activities along the railway by the end of September 17 to guarantee traffic security and safety, local authorities have said.

Local authorities would not trade off traffic safety for any economic benefits, according to Hanoi’s Hoan Kiem District People’s Committee.

The committee announced its decision after international and domestic visitors reportedly flooded the railway that stretches through the area of Cua Dong, Cua Nam, Hang Ma and Dong Xuan wards of Hoan Kiem District to take photos and videos of the train despite the potential dangers caused by train circulation.

In addition, local residents have set up coffee shops along the railway since late 2018. In late 2019, all business activities on the railway were prohibited. The situation became quiet during 2020 and 2021 due to the COVID-19 pandemic but railway coffee shops became bustling again when the tourism sector opened.

Aside from closing the business, law enforcement will set up barriers and persuade both locals and visitors not to violate road safety rules in the area, he said.

The district authorities will collect ideas and study potential plans to make the railway stretches a popular tourism site, however, the action must comply with existing laws and prioritize people’s safety, Quan said.

Nguyen Hoang Anh, Vice Chairman of Hang Bong Ward People’s Committee (Hoan Kiem District), told The Hanoi Times that local authorities will patrol and inspect the area, and make local residents close their shops for the safety of the people and visitors.

In addition, local authorities will work around the clock and maintain close supervision, ensuring no shops are open, he said.

According to the Ba Dinh District People’s Committee, the district has completely shut down all coffee shops in the railway area of Dien Bien Ward.

“Up to now, there are no active coffee shops along the railway that runs through the area of Dien Bien Ward,” the spokesperson of the district said.

In May 2022, Ha Hai Railway JSC also asked the Hang Bong and Cua Nam wards of Hoan Kiem District and Dien Bien Ward of Ba Dinh District to stop tourist and dining activities along the railway. 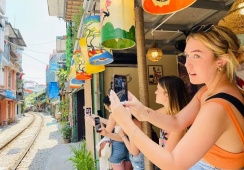 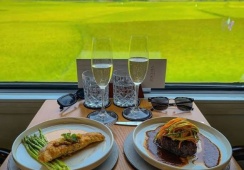