The capital city's authorities urged to push the removal of factories, hospitals and schools out of the inner city.

Hanoi residents have high hopes for the six subdivision zoning plans announced by the Hanoi People's Committee, with the expectation that polluting facilities will be relocated out of densely populated areas.

Vu Ngoc Quy, a resident of Hanoi’s Dong Da District, said that the current four downtown districts are already densely populated, therefore, it is necessary to relocate universities and factories to the outskirts to reduce traffic pressure.

“Industrial production plants in residential areas in downtown districts are completely inappropriate, the Hanoi’s relevant authorities should quickly find solutions to bring them out of the inner city,” Quy told The Hanoi Times.

In an environmental impact report attached to the Capital Law, a law covering the development of greater Hanoi, the city has defined a roadmap to relocate 117 establishments in 12 districts out of the inner city by 2020.

The city has put the relocation of schools, hospitals and production facilities in the list of top priorities to ease population density and reduce pressure on the downtown’s infrastructure, however, it is almost standing still.

Experts have said that there are many reasons leading to the above-mentioned situation, including changes in relevant guidelines, policies, and laws, which have affected the progress of planning and relocation projects.

Besides, the implementation process, requiring a huge budget, has encountered many difficulties in mobilizing resources and capital as well as in the loose coordination among the relevant agencies.

Even when some public offices have been moved out of the inner-city, the agencies still avoid handing over the vacated buildings to Hanoi. Therefore, Hanoi needs a specific mechanism to be able to take over the vacated properties soon after the public owners moved out.

Deputy Director of the Hanoi Institute of Construction Planning Nguyen Duc Hung said that one of the most important goals of inner-city planning is to relocate the offices of ministries and campuses of universities. It will create a land fund of about 176 hectares to build public works as well as green spaces and move 100,000 people out of the area. 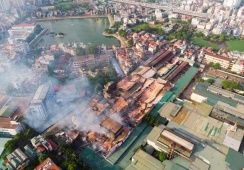 Hanoi to relocate polluting factories from downtown in 2021-25

Polluting bulb factory will be moved out of Hanoi’s downtown