Hanoi’s urban evolution in the eyes of JLL expert

“Stay Sustainable” will be a must-have factor for better living standards.

Many Hanoians consider their doorsteps and streets a natural extension of their own home. With ground floor shops overflowing onto the street and homes widely open to the view of passers-by, what will happen to the urban evolution of Hanoi as residents beginning to move from shop houses to apartments?

As emerging metropolises, these cities are undergoing an urban transition. More than just an architectural change, it involves economic and social movements across the country. The evolution of Vietnam’s urban lifestyle has led to subsequent developmental needs for public spaces in urban areas.

Unlike classical European cities, Hanoi does not typically have squares, and only a few parks, which are mainly located in inherited colonial centers. While Hanoi has ambitious infrastructure projects underway such as airports and industrial development, few are new, open and green public spaces.

As we begin to experience the growing pains of first world problems such as traffic congestion, pollution and over-population, the government and city dwellers are beginning to stand up and take a greater interest in the development and enhancement of urban public spaces. But much more is needed if we are to build truly global cities.

Developers of new residential projects are leveraging on this trend and building integrated development for the city. An integrated development refers to a neighbourhood or township development with mixed-use components such as residential, retail, institution, leisure and more where residents can live, work and play. It comprises multifunctional and interconnected buildings, which focus on the surrounding environment to ensure a harmonious ‘street-scape’ and architecture.

According to JLL's report, the number of integrated developments has substantially increased within the Hanoi residential market in the past four years. Given the limited government town, planning capacity and funding developers have jumped on the opportunity to construct integrated communities. Since it first launch in 2016, the Hanoi property market has welcomed more than 10,000 integrated units with the sale rate of approximately 70% on an average.

With the current context, JLL observes that there is an increasing number of investors who are actively looking for investment opportunities in sustainable integrated development in Hanoi. Developer typically follow some considerations:

• Convenient and available transportation: In the future, most integrated projects will be developed in the outskirts where land is readily available. With growing car ownership in Vietnam, congested roads and lack of parking space will spur the demand for functioning traffic solutions. Sufficient parking, integrated access to surrounding roads and public transport will become a strong competitive advantage.

In remote areas without available planned infrastructure, developers can look into providing their own transportation systems such as shuttle bus services to various key locations within the city.

• Phasing out development: As the size of developments grows, sensible space planning for various functions and building scales has become a challenge for developers. To achieve convenient, functional and diverse quality public spaces, careful consideration of city planning aspects is mandatory. Lively street frontage, plazas, sidewalks and a scaled building arrangement will lead to sustainable and sought-after neighbourhoods, thus ensuring sustained value. Careful phasing should be considered to ensure the sense of completion of each component of each neighbourhood.

• Creating and maintaining public facilities: One key attraction for large-scale projects is the public facilities within the development. Facilities such as public parks and sports stadiums help attract buyers but can be costly to maintain down the road. Therefore, developers should raise awareness amongst buyers regarding potential maintenance costs and how it would be in their interest to fund these costs to safeguard the value of their properties.

• Building variety and human scale: Careful massing of buildings and a variety in architecture design together with meticulous consideration for human scale will allow for a liveable public space. Avoiding a monotonous building expression will provide a delightful pedestrian experience and enhance the living environment. One good example is the Thu Thiem new urban area in Ho Chi Minh City, with careful master planning consulted by Sasaki Ltd. We believe this community will benefit from strong capital gain in the future.

• High-level education infrastructure: Education is one of the top priorities for Vietnamese parents; herein lies an opportunity for developers to incorporate schools to the infrastructure for a competitive edge. Vingroup has been successful by including their schooling operations into their townships in Hanoi.

The United Nations is committed to providing public spaces in the heart of the world’s developing cities. Outlined in its 2016-2030 Sustainable Development goals are plans to help cities “provide universal access to safe, inclusive and accessible, green and public spaces, in particular for women and children, older persons and persons with disabilities”.

This goal will have a significant impact in Asia, which currently houses 53% of the world’s urban population, and is home to sixteen of the world’s 28 megacities. In Vietnam, we are beginning to see the first stages of this urban solution, such as the opening of the first walking street, Nguyen Hue, in Ho Chi Minh City in April 2015, and the expansion of a walking street around Hoan Kiem Lake in Hanoi since September 2016 – creating a huge attraction for locals and foreigners alike.

As urbanization leads to denser cities and higher demand for land, the pressure is on to create and maintain public spaces. The construction and development of sustainable public spaces in urban life remains a challenge in Vietnam.

Creating such spaces, particularly green spaces, is just the start – as a long-term commitment they require regular investment and government support to keep them fit for purpose. The benefits will outweigh the costs, so there needs to be a concerted effort in ensuring more will be done in helping to develop Hanoi’s urban landscape to benefit its citizens.

The Hanoi property market is starting its journey where both public and private sectors are changing the urban landscape to incorporate technology that could enhance the living environment. We expect that for future real estate developments, “Stay Sustainable” will not just be a trend but also a “must-have”, JLL’s expert concluded. 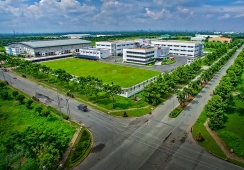