The performance features women who transcend limits to express themselves freely and their creativeness.

Five female international music composers and performers, who are from Vietnam, France, Germany, and Ghana, will hold an experimental music performance titled “Drifting Intervals” at 7pm on July 17 at Hanoi-based Goethe Institute.

The performance will be opened with free admission, however, a donation is recommended, starting from VND100,000 ($4.3).

The performance features women who transcend limits to freely express themselves and their creativeness. They learn about different cultures and enrich their own experiences to make their life more interesting.

Being started from the idea of artist Luong Hue Trinh, material in each commissioned composition of “Drifting Intervals” music project is the personal outlook of Vietnam-Germany cultural exchange. Not only that, delicacy and sensitivity of these artists will also be shown in the improvisation section.

Based in Germany, Eva Zöllner is one of the most active accordionists of her generation who devotes herself to contemporary music.  As an internationally acclaimed soloist, she appears in projects ranging from experimental solo performances to concerts with renowned ensembles.

Artist Séverine Ballon is from France. As a cellist and composer, the artist has deeply been engaged in the development of her repertoire. Ballon’s practice draws as much on key works from the repertory as on her numerous collaborations with composers, working in the intimacy of the fabric of sound. Her solo CD, ‘Solitude’, was released on label Aeon/Outhere in 2015 and her debut-CD as a composer “Inconnaissance” was released on the label All That Dust.

Coming from Ghana, Ute Wassermann is a voice artist, music composer, and improviser. The female artist is renowned for her many-voiced and extreme vocal sound language. Her methods to extend the voice include the use of bird whistles, lo-fi electronics, resonators, and field recordings.

Two female artists representing Vietnam in the performance are a multimedia composer and electronics improviser Luong Hue Trinh and well-known Dan bau (Vietnamese traditional monochord music instrument) soloist Ngo Tra My. Numerous interviews, commissions, as well as concerts that Trinh has organized, were broadcast on radio, exhibited, and performed live on stages in Asia, Europe, Africa and America. Meanwhile, My takes part in many different fields of music, including teaching Vietnamese traditional music, performing and researching contemporary and experimental music. 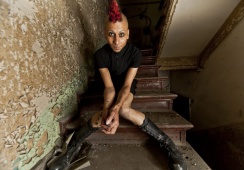 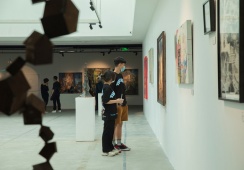 Colorful life in the exhibition “What are we tricking?”