Vietnam, along with Indonesia and Singapore, remains a golden triangle for startup development in Southeast Asia.

Vietnam’s startup market is set to receive investment capital worth US$5 billion during the 2023-2025 period.

The figures were announced at the Vietnam Venture Summit 2022 with the theme "Shifting Global Capital Flows" held on December 19, where 39 venture capital funds pledged to invest $1.5 billion in local startups during the period.

At the summit, Minister of Planning and Investment (MPI) Nguyen Chi Dung said venture capitals and innovative startups would remain key partners of the Government in drafting a legal framework for the development of the local innovative startup ecosystem.

“The goal would be for Vietnam to have an attractive investment environment in the region and the world,” Dung said.

He shared that the MPI will prioritize in the near future drafting the Law on Venture Investment and a legal framework for establishing social supporting funds for high-potential innovative startup projects.

The global economy is undergoing significant changes as a result of geopolitical tension, disruption to supply chains of energy and goods, high inflationary pressure, and risks of economic recessions in many countries/territories. “Vietnam, with a high economic openness level, would face direct impacts from global economic uncertainties,” he said.

In this context, the Government will continue pursuing stable macro fundamentals, containing inflation, and ensuring social welfare. These factors, along with a high preparedness level against the Covid-19 pandemic, would lay the foundation for a speedy recovery of the business community, Dung added.

During the first 11 months of 2022, actual FDI disbursement in Vietnam reached its highest level in 5 years at nearly $20 billion, a year-on-year increase of 15.1%.

In addition, the number of new businesses and those returning to the market increased by 33.2% year on year during the 11 months, of which nearly 138,000 are newly established.

The minister considered this positive news for the startup community that continues to gain attention from investors around the world.

To date, Vietnam is home to 20 privately-run venture funds with a combined registered capital of over VND100 billion ($4.2 million).

Since 2019, the Vietnam Venture Summit has become an annual event and served as a platform to accelerate investment from foreign venture capital funds in the Vietnamese startup community.

Venture capital funds’ commitments to the market rose from $425 million in 2019 to $815 million in 2020, eventually reaching nearly $2 billion during the 2020-2022 period and showcasing the rising attention from global investors to Vietnamese startups.

Founder and CEO of Golden Gate Ventures Vinnie Lauria suggested Vietnam is cementing its status as one of the pillars of the golden startup triangle in Southeast Asia (along with Singapore and Indonesia).

Lauria added the complementary nature of the three markets would open up new opportunities for growth in Southeast Asia, making it a magnet for global capital.

Meanwhile, Director of the National Innovation Center (NIC) Vu Quoc Huy said total investment capital into hi-tech in Vietnam during the nine-month period stood at $494.2 million, down by 17.9% against 2021.

Huy noted the decline in investment capital in Vietnam has resulted from the challenging global economic environment.

The NIC director, however, pointed out that the number of follow-on investments in startups remained unchanged compared to last year, with ten deals in a range of $10-50 million. “This shows startups following the Pre-A and A series funding have seen strong progress and continue to thrive,” Huy said. 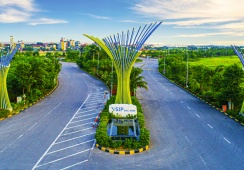 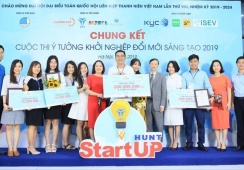