The consortium will execute the contract package in four years, using ultra-supercritical technology.

A consortium of Japanese, South Korean, and Vietnamese companies have been awarded the contract worth VND30.24 trillion (US$1.3 billion) for a thermal power project in central Vietnam.

The consortium of Japanese Mitsubishi Corporation, South Korean Hyundai Engineering and Construction Co., Ltd, and Vietnamese Construction Corporation No.1 JSC (CC1) will be in charge of engineering, procurement, and construction (EPC) of the 1,200-MW Quang Trach 1 Thermal Power Plant in Quang Binh Province.

This contract is part of Quang Trach Thermal Power Center invested by Vietnam Electricity (EVN). The complex project costs an investment of VND41.13 trillion (US$1.86 billion), including 30% from EVN and the remaining from domestic commercial banks.

It is EVN’s first project using commercial loans without a government guarantee.

The consortium will complete the first turbine after 42 months and the second turbine in 48 months since the signing of the contract.

Once put into operations, the plant is expected to contribute 8.4 billion kWh of electricity to the national grid annually.

“Our joint venture is not only committed to ensuring the progress but the quality and environment are also at the highest level,” Lao Dong Newspaper cited Tetsu Funayama.

Vietnam has reduced coal-fired power, moving toward renewable energy. However, this kind of power remains the biggest ratio and most stable source for the national grid, according to Tran Viet Ngai, head of the Vietnam Energy Association (VSA). 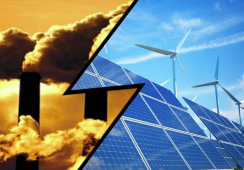